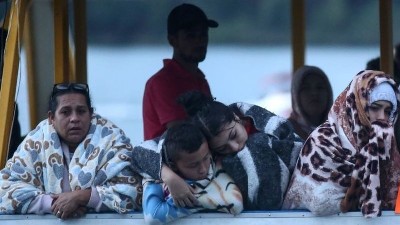 A boat carrying over 170 passengers sank off the coast of Guatapé in Colombia Sunday, June 23. At this time, 16 are missing and six people have been reported dead.

According to reports, the boat in the Antioquia reservoir about 68 kilometers from Medellin, Colombia, sank it less than five minutes. Currently the reason the boat sank is unknown, however, it has been reported that it was not due to overcrowding.

Eyewitness Louisa Murphy told the BBC: "We saw things flying off the side of the boat. And within, I think, probably about 20 seconds the boat had sort of sunk with just the top deck visible."

Luis Bernardo Morales, a fire service captain involved in the rescue, said the boat was very close to the port when it sank.

"We do not know whether it was a mechanical failure, an overloading or something to do with the currents that caused it to sink," AFP news agency quoted him as saying.

Local residents said that the vessel had sunk twice before but had then been repaired before being used again.

The sinking of the four-deck “El Almirante” was recorded on a video that began to circulate on social networks quickly. The video shows dozens of leisure boats and pandas approaching to rescue passengers and crew. The Air Force and their drivers joined later to aid in the search-and-rescue operation.

Those rescued were transferred to the municipal hospital. “Our aircraft and crews are ready to evacuate the most serious requiring immediate attention, “the Air Force said.

The mayor of Medellín, Federico Gutiérrez, announced sending of a relief team led by a fire captain and five divers.