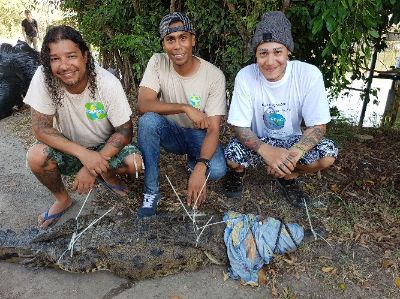 The organization explained that the crocodile, native to Panama likely got to the lake by swimming through various lakes, river systems and streams.

The conservation team explained that the crocodile is a bit more aggressive than the usual caiman resident and for this reason could be dangerous due to it’s size (approx. 6.5 feet).

Since people often feed the caimans, and there are many small pets in the area, the team decided it would be best to relocate the large reptile.

The croc was caught using noose, with which it was pulled it out of the water. His mouth was held tightly shut and tied, along with  his feet. The plastic ties were tightened and his eyes were covered with a sheet to keep him calm.

The Coronado crocodile will be taken to Lake Gatun near Barro Colorodo Island where he will be released.

The rescue organization APPC and can be called on for wild life rescues. They can be contacted through their website appcpanama.org

Photo Gallery for Crocodile removed from Tortuga Lake in Coronado