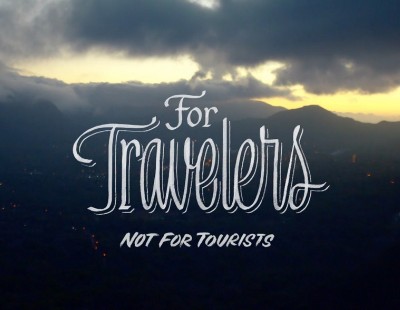 The country of Panama has employed a Chicago-based ad agency, VML, for a new campaign to promote tourism in Panama. Ironically, the tagline for the campaign is “not for tourists.” The campaign, which primarily focuses on Panama’s interior, promotes Panama as a destination, not for your average tourist but for serious travelers, birders and adventurers.

The campaign’s counter-intuitive approach is already attracting attention. “Forget all that drivel that too often passes for tourism advertising these days,” the Chicago Business Journal writes. “The VML Chicago ad agency has boldly gone in an entirely different direction in concocting a new, uh, tourism campaign” for Panama. VML was hired earlier this year as part of a two-year $20 million agreement to promote Panama in North America and Europe.

While the ad campaign might seem a little silly at first. Recent studies show more and more travelers—especially younger travelers–are looking for experiences in favor of the all inclusive vacation. The new campaign represents “an interesting approach and one that also reflects the way that travel advertising is changing,” Creativity writes online. “If you’re someone who doesn’t fit into the ‘tourist’ stereotype, this will definitely appeal.”

Several short viedos have already been released in the North American and European markets. Here is an example:

Here are some of the non-tourists who's attention Panama seeks to grasp:

Photo Gallery for Tourism campaign says Panama not for tourists Panama for the curious