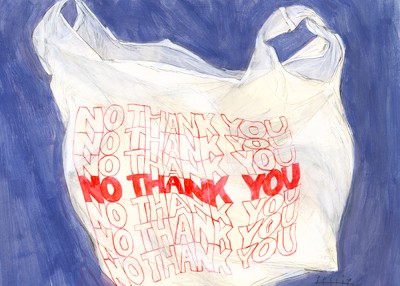 Non-Degradable plastic bags could become history in Panama, if a bill proposed by the deputy of the ruling Panamenista Party is passed.

Bill 136 is being proposed by deputy Florentino Abrego in an effort to reduce the environmental impact of plastic bags. Getting rid of the production, distribution, use and accumulation of one use plastic bags on national level would have global benefits.

“What is sought is to prohibit the use of non-biodegradable bags provided free of charge in commercial establishments. After their short term use no one is responsible their collection, treatment, reuse and final disposition,” said Abrego.

According to studies, a degradable plastic bag takes two years to disintegrate, the
Biodegradable take 120 days to decompose and regular bags take 300 years to disappear.

Those who violate this law will be sanctioned with fines of ranging from $100 dollars and $1,000 dollars along with the seizure of non-biodegradable transport bags, says the initiative. The funds will be used for environmental and recycling training fund according to the proposal.

The proposal  says  that money from  fines will go to an environmental and recycling training fund.