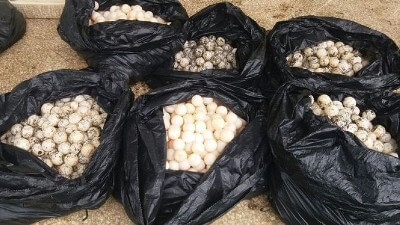 An illegal shipment of over 7000 turtle eggs was recently recovered from a car traveling to Panama City. The turtle eggs, from two endangered sea turtle species Green and Olive Ridley, had been poached from the Tonosí district by a man who the Ministry of Environment considers to be a ringleader of turtle poachers.

Unfortunately, the perpetrator has avoided the suggested prison sentence of 37 months, receiving a fine of $600 that is payable over a year.

Of the 7368 sea turtle eggs confiscated, 4851 of the illegally poached turtle eggs were destroyed during transport. The remainder, 2517 turtle eggs, were rescued and are currently being cared for by the Pablo Arturo Barrio Wildlife Refuge in Pedasí.