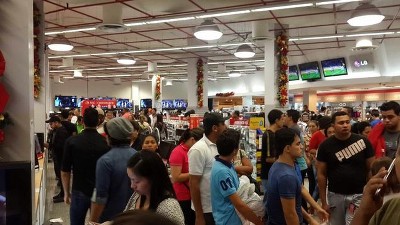 The weekend-long shopping event “Black Friday Weekend” in Panama was a success, doubling commercial movement in malls and hotels throughout Panama City.

The event was moved to September in an effort to increase tourism and sales during a typically slow period in Panama. The country’s tourism authority (ATP) promoted Black Friday from September 15th - 17th in 2017, with a goal of competing with busy shopping days like the start to the school year and Christmas eve.

Tourism Authority (ATP), administrator Gustavo Him, said this year proved to have been a success, “taking into account that it [Black Friday] took place in the most difficult month for trade.”

“Commercial movement at the mall doubled on the weekend compared to times of high demand,” said Nadyi Duque, president of the Panamanian Association of Shopping Centers (APACECOM).

With about 104,000 people entering Albrook Mall, at the start on Friday, September 15, and over 116,000, the following day, Black Friday brought more people to the mall than other busy shopping days.

It was not only shopping centers that say an increase in sales, hotels across the city which have been running at 40% occupancy rate for months were fully booked.

Normal big weekend discount events, Christmas and the beginning of the school year bring about 80,000 people to the mall.

It was not only Panama City that saw an increase of shoppers due to the Black Friday marketing campaign created by ATP. The shopping centers Paseo Central and Santiago Mall, in the interior of the country along with Mega Mall in Panama East, also reported increases in sales.

Director of the ATP, Gustavo Him said, “Panama Black Weekend is a unique product with no competition in the region. We are alone and we have created a brand as a shopping destination, which is also an important “hook “for the capital city that has positioned itself as a shopping hub. Panama has that leadership and we must take advantage of it.”