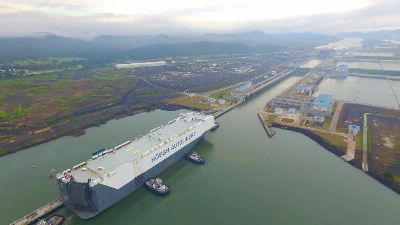 The world’s largest Pure Car and Truck Carrier (PCTC), Höegh Target, transited the newly expanded Panama Canal yesterday, Thursday, September 8th, 2016 in the early morning. The Norwegian vessel was built in 2015 with specs to fit though the newly expanded locks.

The ship began in trip in Japan and before Panama the ship was in Mazatlan, Mexico. Now, Höegh Target is heading for Alabama, United States. The ship’s carrying capacity is up to 8,500 car equivalent units (ceu) with up to 6.5 meters of free deck height, 12 meters of ramp width and capacity to take cargo weighing up to 375 tons. It measures 199.9 meters in length and 36.5 meters in breadth.