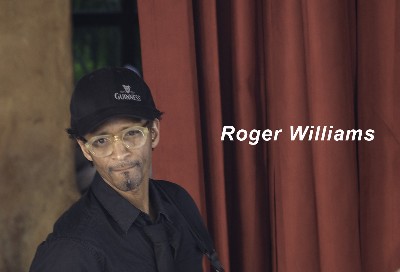 If you have been to a Bouquet Jazz and Blues festival (BJBF), you will have seen several familiar faces play back up as sidemen to various headliners. Who can forget the hypnotic rhythms of LA Smith on bongos and percussion, or the accomplished Lance Anderson on keyboards.

Even Deanna Bogart who headlined at the festival herself played back up for various other headliners.

'Sideman' is a term meant to describe a musician who is not leading or fronting a band. Often musicians will assume sidemen roles before they begin leading their own groups. The sidemen (and women) who have graced the stage of the Bouquet Jazz and Blues Festival over the last few years are versatile, life- long musicians who are notable in their own right.

A sideman has to be a well-rounded musician who can wear many hats. At the BJBF of 2016, sidemen played with many different headliners. Some of which, they had never played with before. It is a rigorous task. Sidemen at last years festival had to learn up to 35 new songs on a very short deadline and be willing to jump in and preform at a jam after spending hours at the main event.

From the audience’s viewpoint, the last BJBF was full of great music. To most it seemed that the bands preforming had been playing together for years. That is the substance a good sideman brings to a band.

Musical experience and trust go a long way when it comes to choosing sidemen in the industry. A sideman can make or break a band. They have to be able to support musically and play well with others in more ways that one.

Deanna Bogart, an accomplished award winning musician, who preformed as a sidewoman for most of the headlines at the festival, says that a sideman also needs interpersonal skills, a diplomatic temperament and a strong sense of responsibility. “You need to be sober, on time and not bring anybody down”, says Deanna. “There is a language among musicians”, she says “and a trust that carries the music. You have to be quick and follow the band leader and you have to respect that it is somebody else’s gig”.

Even while a sideman is ‘on the side’, so to speak, the unique atmosphere of the BJBF festival allows sidemen to show their stuff. Lance Anderson, another life-long musician, who also is Artistic Director for multiple Canadian musical festivals talks about his experience playing as a sideman at the BJBF. “This is a festival where people feel free to not just play their show, or their style of music, but to join in with the true spirit of improvisation and play with other artists. To have a festival that encourages that is a very special accomplishment”.

For long time musicians who have played various venues and festival stages, the BJBF is a unique experience.  “It is relaxed, informal, personal and friendly.” Says Lance. “I have learned to go with the flow. BJBF is unique, it is more than a festival, it is a family. This vibe is very hard to create in a festival but in Boquete it works so well, it looks easy.

In a nutshell, the sidemen make the front man look good. They fill out the edges and deliver the music and the message the front man brings that allows the audience to get lost in the sound. They bring with them a passion for music and a generosity of spirit that is felt beyond the music. The next time you are at the BJBF festival, pay attention to the people who are backing up the headliner, and know they have a lot more to offer than what you are seeing on stage.