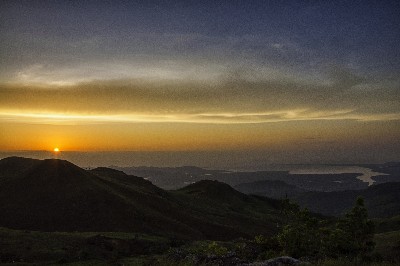 Chicá is a small territory in the district of Chame located about 70 km from Panama City. The entrance to the mountain region is easy to spot, located on km 61 from Toda Loma, Campana. Named after a chief who ruled the land in 1519, when the Spaniards arrived, Chicá is the smallest territory in the Chame district  but definitely one of the most beautiful.

Marking the limit between the vast coastal plains and the highlands from the central mountain range in the district of Capira, Chicá is a milestone for travelers. A place to explore a labyrinth of peaks and valleys covered in natural forest. For years, traveling the region proved to be a  test of endurance for both animals and vehicles alike. However, today better roads provide access to one of the most sublime panoramic views that can be imagined.

This captivating area, with the most striking views from the Chame’s mountains located in the Altos de Campana National Park in the district of Capira, is one of the most wild and spectacular mountain ranges in the district. One of the reasons for this is that it is easily accessible, a day roaming around the mountain range is one to be remembered.

Chicá was created in the tertiary period from volcanic material erecting above the coastal towns. Peaks and water courses are scattered along the walking paths and beautiful buildings in the small town resemble brush strokes in a painting, offering evidence of a human landscape.The amazing views of the green-blue mountains can be seen from anywhere, along with winding estuaries in the Chame Bay. The water brings the sensation of serenity, complemented by the green vision from the tropical evergreen trees.

This small homestead offers visitors a vision of local architecture, craft and traditions. It is also a colourful community as the flower trade is the main commercial activity.

The most emblematic celebration in this territory takes place every year in April with the start of the rainy season. However this year the festival took place at the beginning of May as rainy season came late due to El Nino.  Over a three day festival nearly 5,000 people witnessed  the vast amount of plant and flowers that this beautiful place in Chame has to offer. The abundance of flowers and freshly harvested plants are available throughout the green season.

The small festivity aims to pay tribute to the main commercial activity of ‘Chicaeños’ (residents of Chicá), offering each family time to enjoy the native flowers and the joyfulness, peace and fun they bring. The fair has been celebrated for 15 years now. It stated as an idea several residents had. The handful of residents aimed to further their efforts to sell local products in the capital of Panama - Panama City. In an effort to reach the city, these residents decided to organize a fair where residents of nearby towns and of the capital city could visit and get to know their beautiful landscapes and buy their products.

This yearly event brought together a great number of people that came to share with friends and family and to take a big reminder  from this magnificent land - plants! Although it is a small festival, this year more than 5,000 people visited.

About 14 years ago, when it began, the expectation wasn’t that high, but today it is one of the most anticipated festivals in the region, bringing more people up the mountain each year.

The joy, party, culture, flowers and tourists, take three of the community streets and transform the entire town. Everyone decorates their yards and gates offering their products to entice clients.

The most representative event from the fair is without a doubt the selling of flowers, where a great amount of them are brought from fields and nursery garden areas to be offered to tourists, some with cars, others with horses or scooters, but most important is the they populate the market area where they are displayed.

This is the spectacle that most of the national and foreign tourists are waiting for and celebrate. Chicá is represented by this lovely tradition.

The flower fair is a great cultural event  for the territory of Chame, asserting their identity as people. A festivial is a display of how Chicaeños work together and offer tourists and visitors an example of camaraderie that flourishes in the town by  their people and traditions.

The drive to Chicá passes through winding roads, the landscapes are unsurpassable; after about 5 km from the entrance in Loma Campana the ANAM offices provide visitors with information on their surroundings. The office is very close to some great vantage points, offering stunning panoramic views of the Bay and the Sajalices river basin. Through the deep cliffs, rivers quietly flows along a gallery  of woods and mosses creating beautiful valleys. The sensation of being in the middle of backwoods is unlike any other. These elements that are usually hard to find together, can be found in this small territory.  It is not coincidental that the area is known as Chame’s natural jewel. Its rivers, spectacular waterfalls and conserved trees, make of Chicá on of the most beautiful landscapes and real gift for the eyes.

Bus: There is a bus up to the town of Chicá that leaves from the central bus stop in Capira (just before Queso Chela on the mountain side heading to Coronado). You can get to Capira by catching a bus from any neighbouring town or from the Albrook terminal. If you are leaving from Albrook ask to get off at the main bus stop in Capira. From the main Capira bus stop you will need to transfer buses to get to Chicá.  Once arriving in the center of Capira take the bus leading to the Chicá village and Campana National Park. If in doubt  if you are getting on the right bus be sure to ask your driver!

Note: To use the terminal you must pay 10 cents. To pay this fair, you will need to purchase a rechargeable card for $1 and charge the card with that amount.

Car: In order to reach Chica, leave the capital on the Interamerican Highway, passing Arraiján, Chorrera and Capira. A few kilometers after Capira where the highway winds up the mountain,  at the highest point of the climb to the right is the entrance sign to the park, which also leads to the town of Chicá.  Leaving from Coronado after passing Sajalices village and Loma Campana ascent, at the highest point, across from a single house with a large stone wall you will see Chicá  and Campana National Park entrance which is marked, this turn will take you to Chicá.

You can also get to Chica using a new road that connects this mountain village with the community of  Buenos Aires, in Bejuco. The entrance is at the small plaza where Pio Pio is (the road that takes to Altos del Maria) when you get to Buenas Aires you'll see a paved street on the right hand side that takes you directly to Chica