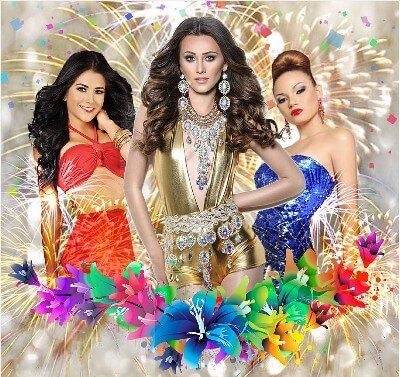 Carnival, or “Los Carnavales” as described by most Panamanians, has been celebrated nation wide since the early 1900’s. Each year for the four days leading up to Ash Wednesday, the country shuts down to party.

The 2016 dates and closures
While crowning of the queens begins on Friday night (February 5th), This year Carnival will officially begin on Saturday February 6th. Expect Friday February 5th to also be a busy day at the beach.

Queens of the Interior
Among the highlights of carnival is the crowning of a new queen. Typically the town is split into an upper and lower section (calle arriba y calle abajo), crowning their own rival queen. Each section boasts being better than the other, having a better party and the more beautiful queen. During carnival, the competitive emotions of the towns run high. Being crowned queen is a tremendous honor, not only for the young woman being crowned but also for her family and her “tuna”. The tuna are the people who support the carnival queen.

The Three Tunas of Las Tablas
This year, the Mayor or Las Tablas Noe Herrera, established there would be three tunas and three queens.  Having three tunas is something that never happened before. However, with differences among Calle Abajo members, who disagreed on the new queen for 2016, the decision was made to divide Calle Abajo in to two groups so each could have their own queen. The people will decide who they feel is the most beautiful queen (from the three) at the end of the festival.

Carnival in the Interior
Traditionally Carnival begins with the coronation of the queen on Friday night, when last year’s queen crowns the new queen. Saturday morning till night, the culecos (water trucks) musicians, dancers, street vendors and floats are in action. For the next three days the festivities continue, and the queen for each town are paraded through town morning and night, each time in a different dress on a different float. Tuesday night is the last night of carnival, it offers the largest fireworks and the wildest parties. On Wednesday in the early hours of the morning, the parades of the upper queen and lower queen meet and end the rivalry between the regions and the carnival parties. The close also marks the beginning of Ash Wednesday and the start of Holy Week.

This year the Tourism authority will spend $144,000 on national artist that will be preforming during carnival in Panama City. Tomorrow (Friday night) the queen will crowned and the evening will continue with free concerts. Among the artist performing in Panama City are Sammy & Sandra Sandoval and Ruben Dario Maravilla.

Cost & Profit
ATP has been allocated $2.2 million for Carnival, $1.5 million will go to Panama City, and $700,000 will be spent in the rest of the country (Government Gazette). This budget can be compared to last year, when the government spent $1.6 million on Carnival.

Gustavo Him, administer of the ATP hope that Carnival celebrations in Las Tablas alone with generate $25 million in commercial movement. The ATP hopes for over 20,000 tourists from other countries, along with many from within the country, to be traveling around Panama.

Carnival and Water
As the country struggles with drought, some fear that Carnival will be a detrimental drain on the countries water resources. More water is used during carnival as more people are in the country and traveling. Furthermore, water (culecos) tucks have been a long standing tradition during carnival.

We asked community members their thoughts on the situation:

Most felt that although water is a scarce resource, canceling carnival all together would be a great loss for the country. However, several people felt that canceling the water trucks could help preserve water.

The National plan to Conserve Water

On Feb 2 the Ministry of Environment resolved that there should  groundwater sources (wells and aquifers) should not be used for recreational purposes  (culecos or similar). This resolution applies to all groundwater sources on the Pacific slope, during Carnival or other holidays taking place during the dry season of 2016.

The Ministry of Environment reported that raw water for recreational use can only be drawn from surface sources (rivers) on the Pacific coast. These rivers will be points authorized by the Ministry.

Over Carnival there will be 22 points, in six provinces, where the abstraction of raw water is permitted. It was also stated in an earlier report that the number of tankers filling from each river would be limited to 14 takers per day. The rivers that will be used during carnival are as follows:

In Chiriqui water will be extracted from Rio Chririqui, Rio San Felix, Rio and Escarrea

In Cocle water will be taken from Rio Chico de Nata, Las Mendozas and Rio Grande riticism on the use of Water during Carnival

While the use of water for recreational purposes will be limited to approved rivers, the decision to use water at all has been criticized.

Jorge Arango, Minister of Agricultural Development (MIDA)  called it a ”crime" to use the countries water reserves (rivers or wells) “with drought caused by the El Niño phenomenon aggressively plaguing Panama”. In an interview with TVN Mr. Arango said: ”I very much hope that instead of taking the water drawn from rivers to the carnival… it is taken to pastures and agricultural areas.”

In a personal opinion piece for La Prensa, Margarita Erne Morales spoke to water crisis and Carnival, urging Panamanians to think about the negative consequences of drought and rather than focus on the immediate benefit of partying, to think about the long term effects drought can have on the nation. These effects range from a hike in food prices to huge losses in the agricultural sector.

Sra. Morales also spoke to the festival following Carnival, ithe Atalaya Christ procession on February 14 starting midday. In her article, Sra. Morales pleads for solutions to the water crisis before the next festival, where residents are already having trouble providing pilgrims with a glass of water.

The purchase of 20,000 cases of bottled water was approved by the government in an effort “to increase the reserves”  over Carnival. It was reported that the bottles would be distributed over the holiday as needed by the local police stations. In a report by the Ministry of Communication of the State the purchase aims "to bring peace to people who depend on rural water supply, who are being affected by drought, and to support the logistics of more than 30 thousand members of the Joint Task Force (FTC ) who will work this Thursday for the next 11 days to provide protection to the population."

It is unclear if there is a plan for the bottles to be recycled.

With carnival landing in the heart of dry season, it will always increase water usage at a time when the country is likely struggling to provide water. It will always deplete water reserves in specific parts of the country, as people are traveling and celebrating. Help save water with these 10 tips:

1. Turn off the tap when you brush your teeth.
2. Take a shorter shower.
3. Repor broken water mains to IDAAN.
4. Fix a dripping tap.
5. Fix your running toilets.
6. Don’t wash your car.
7. Stop using Potable water to water plants.
8. Fill the sink and turn off the tap when doing dishes.
9. Use a watering can instead of the hose.
10. Avoid Recreational water toys the require constant flow of water.

If you're “Carnavaleando” (partying at carnival) this year be safe, enjoy and remember…

The state in which we leave our town centers and beaches after the party is over, will reflect our ability to sustain not only this important festival, but the health of the country.  Take your trash with you, and pick up a piece that was not yours, this way the community is improved by your presence.