Despite a perceived slowdown of the Panamanian economy, Panama has been the most dynamic economy in Latin America for the last three decades with the highest per capita income in the region (IMF).

According to recent analysis completed by the International Monetary Fund, Panama’s economy has grown by approximately six percent annually for a quarter of a century. The IMF stated that the growth rate is actually higher than strong economies like Chile, Dominican Republic and Peru, and furthermore, it’s twice the growth rate of all of Latin America.

With a forecasted GDP of 5.5% by The World Economic Outlook for the next five years, could Panama becoming Latin America’s first advanced economy? Perhaps, but there is still a lot of work to be done.

The analysis, along with various sources reporting on it, spoke to the measures Panama would need to take to promote growth that is not only exponential but also inclusive. In the article "Panama: the irony of stellar growth" La Estrella compared Panama to Chile, as similar in terms of per capital income, but lightyears away from one another when compared by local poverty levels. Panama was ranks the 10th most unequal country on the GINI index a World Bank indicator of poverty. 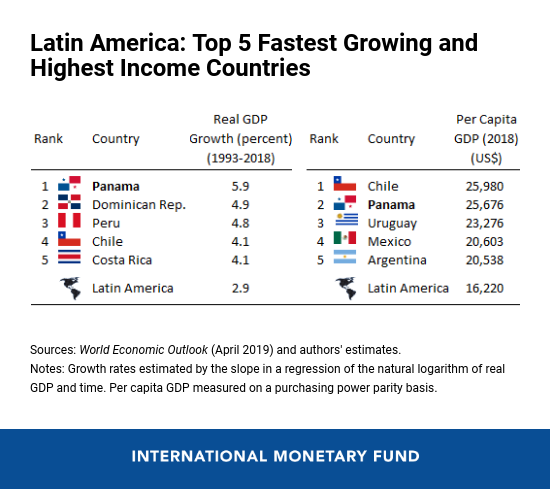 Panama has sustained growth of its GDP however, the country remains ripe with social disparities. To improve and become a true leader in Latin America, Panama will need to do more. While, public works projects and increased transparency in government will support growth and enhanced the economy, Panama will need to take on project that continue to take the back burner like education and health.

In Panama is going to continue to grow and improve the new administration (in effect July 1) will have to take on new challenges. According to the IMF a focus on the quality of education, improvement in public health services and more skills and training programs would be required in the area of health and education. Under labor supply Panama would need to work on relaxing tight regulations that prevent the expertise of foreigns from increasing productivity in Panama. Under governance the report states Panama must continue to push for financial transparency and an exchange of tax information to improve integrity, and become regional financial center. Finally in the area of fiscal discipline, the report spoke to supporting the recently created fiscal council to ensure that the public debt-to-GDP ratio continues in a downward trajectory.

So will the next administration push Panama towards becoming Latin America’s first Advanced Economy? We don’t know. But what we do know, as explained by, Alejandro Santos and Metodij Hadzi-Vaskov in ’Panama: Quantum economic jump’ is that Panama is strong and unique.

According to the document, no economy (other than Qatar) that has experienced growth at a higher per capita income than Panama in the last quarter of a century, and that is a pretty big feat. The only bigger jump imaginable would be a more equal distribution of that growth.