Flower Parade 2017 in the Chiriqui Highlands 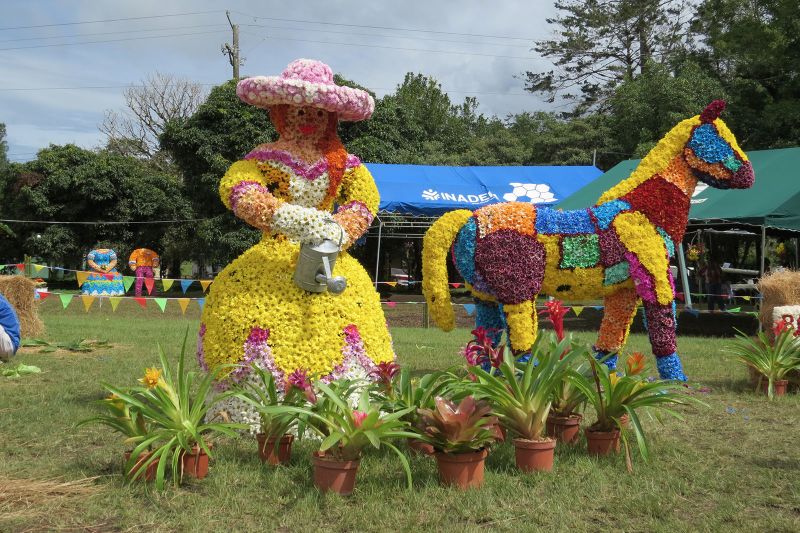 Last weekend (Sep 15th - Sep 17th) the 3rd Flower Parade was held in "Tierras Altas" in the province of Chiriquí. The event offered an exhibition of floats decorated completely with natural flowers and Agro products, as well as presentations from bands and musical orchestras.

Arriving in the village of Volcan the bridges of the entrance to the village were adorned with floral arrangements. As you walked through the entrance, complex floral arrangements in the shape of different animal made entirely with natural flowers and fruits were lined up at the edge of the street (see photos). Many shops had their entrances adorned with flowers in support of the festival.

The theme for this year 2017 was "The Agro is also Panama", which sought to draw national attention to the floriculture and agricultural products that are produced in Highlands (Tierras Altas).

In its first year "La Parada de las Flores" (Flowers Parade) received about 20 thousand visitors, last year received almost 55 thousand and this year it was expected the parade would receive around 60 thousand, While at the time of publishing the exact number of visitors was not yet recorded, the number of visitors is estimated at around 85 thousand visitors, both nationals, and tourists.

The headquarters of "La Parada de las Flores" was the Agricultural College of San Benito in Volcan, where there were contests and competition of Flower Arrangements, Hats, "Mi Nagua Ngobe Bugle" (an indigenous dress), presentation of high-school horses and "tabloncillo", pyrotechnic fires and more.

The Flowers Festival had several cultural activities, the most outstanding being the presentations of folkloric ensembles and presentations by artists of typical Panamanian music. With these activities, it was sought to re-consolidate and show visitors the rich typical culture that is lived in Highlands and throughout the "interior".

The parade also included a presentation of the bands and orchestras of the Colegio Manuel Maria Tejada of Las Tablas, Professional and Technical Institute La Chorrera, among others.

Preparation of Floats and Flower Arrangements

Playa Community spoke with one of the organizers of the event, Mrs. Vicki Lopez, she told us that the preparations for this event began a month earlier with the assembly of the bases for the floats and floral arrangements, that way the structure must be ready 6 days before the event to start placing the flowers, which last from this time until the end of the festival.

Most of the flowers used in “La Parada de las Flores de Tierras Altas” were donated by the company Cerro Punta S.A. which is a sponsor of the event.

Videos from the Flowers Parade in Highlands Chiriqui

Photo Gallery for Flower Parade 2017 in the Chiriqui Highlands