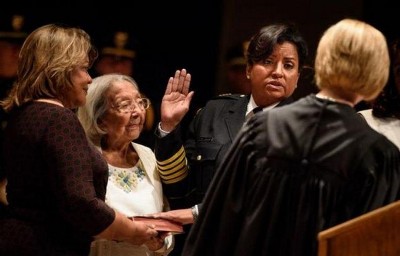 Gina Vaneesa Hawkins Esquivel, will be the first women to run a police department in Fayetteville North Carolina. While born in Ohio, Gina has relatives in the community of Narganá, in the Guna Yala region of Panama.

Gina took office after being selected from 30 applicants. With a long career as an officer, sergeant, detective, and lieutenant and captain, it is clear she is the right woman for the job.

“When evil and hatred are making their own, the only thing that is capable of changing that hatred is love,” she said in a speech to a large audience and police.

“What better opportunity we have as a Police Department to show the country and the world that we can be warriors and protect and serve our community with the light of love,” said Gina.

Her family, including his grandmother Aurora Garrido, 98, traveled from Panama to attend the ceremony. Eugene Hawkins, Gina’s father, a native of Sparta, Georgia, met Gina’s mother, Yadira A. Esquivel de Hawkins, while serving in the US Army.