Will Ruben Blades run for President in 2019? 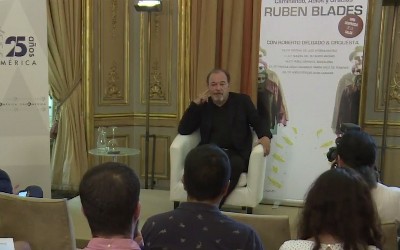 Panamanian Salsa musician, author, and actor, Ruben Blades announced Friday, July 14th in Madrid that he will be taking a break from Salsa. The Multiple Grammy winner has decided to suspend touring as a musician while he considers other interests, among which could be a second run at Panama’s presidency.

While Blades did not commit to a Political future, he did say it was a possibility. He also spoke to producing documentaries, directing along with other interests like painting, archeology, and paleontology.

69-year old Blades the press in Madrid, “I have to organize my time to attend to things that I still have to do. The tours take up too much space. And I no longer have the luxury of being 20 years and believing myself immortal.”

“I’m not retiring from the world of music,” he said […] but “there is a time in all of our lives when we understand that we have more past than future. That is the time to organize the time we assume will remain, because there are no guarantees of this.”

If Blades decides to run in the 2019 Panamanian election it will be as in independent candidate. This will not be the first Political appearance for Blades, the Panamanian icon was the Minister of tourism for Panama from 2004 until 2009 and ran for president in 1994 when he received 20% of the votes.

Blades will be in Spain until the 22nd of July, playing a five concert tour Caminando, Adios y gracias.