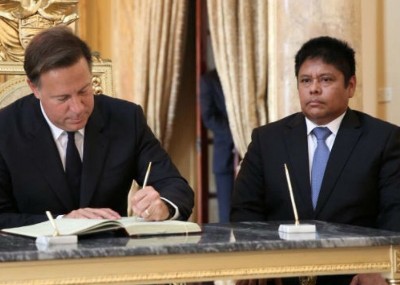 A decree signed by president Juan Carlos Varela and the Minister of Security, Alexis Bethancourt will offer a special early retirement plan for ten police officials, including Ministers, Deputy Ministers, Directors, Assistant Directors and Secretaries General of institutions and of the Executive branch.

The decree grants the early retirement (earlier than the law mandates for the Security Forces bodies) allowing them to leave office with a monthly retirement bonus of 7 thousand dollars.

The early, and costly retirement plan, could pay out an excess of 8.4 million dollars, while only benefiting a group of ten police officials that currently occupy these posts of control and jurisdiction in the Central Government. The new decree indicated that only police officers who occupy “positions of hierarchy” in the Government shall retire with the 100% of their last salary upon leaving office. Lawyer, Ernesto Cedeño explains, in an article published by Panama America, that the decree contains illegal overtones exceeding what law 93 establishes on the limitations on special retirement of uniformed men of Security Forces.

However, government officials such as Minister of Social Development, Alcibiades Vásquez, have expressed their respect the decision of the President, on the grounds that the job is an exhausting and dangerous one.

The general Secretary of the National Federation of Public Servants, Alfredo Berrocal, in Interview at RPC Radio, said that the President should repeal the decree on the grounds that it would be sacrificing more to taxpayers dollars on expensive salaries.

Berrocal said that in the coming days they will file a claim of unconstitutionality against this Decree, arguing that it promotes personal privileges and distinctions.

Marylin Vallarino, Member of the opposing political party, Cambio Democrático (CD), said “there are people who worked for many years and their wages do not reach 500 dollars a month", pointing out that these people, in the end, will receive a retirement pension lower than their current salary.

Political analyst José Blandón said that he believes if the decree materializes "other sectors will say: why them and not us?”