The Panama Canal: The Past and Future

panama articles panama national news The Panama Canal: The Past and Future 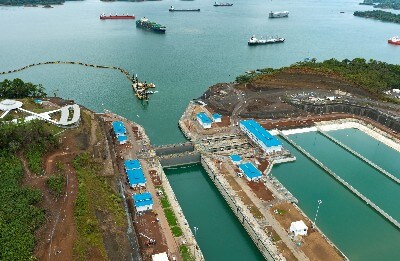 After billions of dollars in expenditures, the much awaited Panama Canal expansion inauguration will take place this month. On June 26th 2016 Cosco, a Chinese shipping company, will embark on the maiden voyage through the newest set of longer, wider and deeper locks in the Panama Canal.

When The Panama Canal project was first completed in 1914 it was the largest construction project in history. It literally moved mountains and connected oceans, physically transforming the country. With the onset of WWI, the canal barely made the news. Despite the engineering feats and the creation of  the world’s largest man-made lake and dam, the only Panama Canal headlines were unfavorable.

The New York Times called it an "act of sordid conquest" and The New York Evening Post, a "vulgar and mercenary venture."

With a high death toll and an opening date in a time of war, when world trade was at a low, perhaps the lack of fanfare was fitting. In the first years there were only about five ships a day passing through.

By WWII the canal was receiving steady traffic. Ships no longer needed to travel around the southernmost tip of South America. The mere 51-mile channel saved nearly 8000 miles from what was once a far more dangerous journey. By the year 2000, the canal could not keep up with demand. It had defined ship design, with the Panamax (previously the largest ship that could fit thought the canal) and the larger “New Panamax" in anticipation of the canal's third set of locks.

The canal has not only played a huge role in shipping logistics, it has played a part Panama’s independence and the transformation of the Panamanian Isthmus, now riddled with mega projects.

While some believe the new expansion may already be obsolete, with shipping companies building larger ships that even the new locks can not accommodate, the recent expansion will undoubtedly continue to have an effect on trans-American shipping. Both optimists and skeptics will agree the canal has, and will forever influence the country.

More than 70 heads of state and government from around the world have been invited to a  much awaited inauguration of the expanded Panama Canal. Among those confirmed is former U.S. President Jimmy Carter, who’s attendance at the inauguration was confirmed by Vice President and Foreign Minister Isabel de Saint Malo de Alvarado.

Jimmy Carter’s presence would be significant because of the role he played in ending the United States’ colonial presence in Panama. Carter was president of the United States from 1977 to 1981 and during his term he negotiated the treaty between Panama and the United States responsible for giving Panama control over the Canal. The former president, who is now 91 years old received the Nobel Peace Prize in 2002 for playing this important part in history.

On September 7, 1977, Jimmy Carter and the late Panamanian General, Omar Torrijos, signed treaties that stipulated the return of the canal to Panama on December 31, 1999. The ground work for these treaties began even before the Carter administration. Secretary of State Henry Kissinger illuminated the importance of such an agreement in a meeting with President Ford in 1975, saying “if these negotiations were to fail the United States would be beaten to death in every international forum the result would be riots all over Latin America.” In 1973, the Nixon administration appointed U.S. diplomat Ellsworth Bunker to lead the negotiations. Bunker and his team drafted a series of agreements with the government of Panama that would eventually become the Torrijos-Carter Treaties.

With the new expansion, the country continues to grow and learn from the beast that in many ways made it what it is today - the canal. Authorities are realizing that deforestation threatens more than the influx of tourist or endangered species that attract these tourists. They are realizing that it endangers the Panamanian population and the canal itself by threatening a main potable water source, Gatun Lake.

Each time a ship passes through the canal 52m gallons of fresh water is used from the canal’s watershed, being discharged from the locks and into the ocean. This year, for the first time since 1998 the Panama Canal restricted the depth of vessels passing through the canal due to extremely low water levels in the lakes that feed it. While the low water levels were mainly attributed to  El Nino, deforestation and climate change are surely playing a role. By 1985, the proportion of forested area in the watershed had fallen from 85% to 30% in 50 years.

The canal needs high water levels in order to operate, the rainforest helps produce rainfall, and forested area protect from erosion which is costly to the canal. This symbiosis shows the logic in protecting Panama’s forests.

Greater protection of forests in the watershed has already begun with a ban on clearing and the creation of national parks. While the country has a long road ahead in the world of conservation, this is a step in the right direction. Reforestation and education on the effects of cattle rearing and slash-and-burn agriculture in the watershed has led to an increase in forested areas up to nearly 50%. The types of vegetation used to reforest have been selected based on their ability to reduce erosion and maintain water flows.

But the new locks will mean that the canal will require more water than ever before, so the Panama Canal Authority will need to continue to make considerations as to how to generate that water.  Seemingly they are heading in the right direction not repeating history. Rather than flooding more forested areas and relocating rural communities, they will deepen Lake Gatun. Furthermore, the new locks will use adjacent basins to recycle water. However, the solution might not be as simple as some might have hoped.

The Panama Canal expansion may have also played a significant role in ancient history. 21 million-year-old monkey fossil teeth were discovered during the expansion, providing evidence of a monkey on the North America continent before the Isthmus rose. The Smithsonian has published the discovery in the online journal, Nature Today, naming the new monkey species Panamacebus transitus in honor of Panama and the monkey's trip. The ancient monkey species would have crossed the sea that divided North and South America.

Before the discovery of the monkey teeth, the oldest evidence of movement of mammals  from South to North America are 8 and a half and 9 million-year-old fossil remains of giant sloths.

So along with questions like “will the expansion turn Panama into a regional hub for trade” and “how will it affect global shipping logistics” we should also ask how the country’s past can help us improve our future, both which are undeniably connected to the Panama Canal.