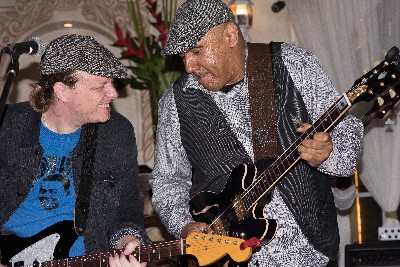 Tickets for the 2017 Boquete Jazz & Blues Festival go on sale this month on May 1, 2016. The festival which has lit up the slopes of the Chiriqui Highlands for the last 10 years is an incredible opportunity to watch and listen to some of the world’s best blues and jazz artists preform at their best in small, intimate venues.

John Wolff, Festival director says, “it’s a musician’s festival”. By that he means that because the musicians have a lot to do with the content and atmosphere of the event, they are eager to come to Boquete and be a part of the experience. John explains that at most festivals musicians are booked to come in play at the certain time and preform certain songs. They come in, do their thing and leave. The Boquete Festival is a little different. John brings musicians in for the entire 4 days of the event, regardless of when the performance is scheduled. What happens in between performances? Musical magic. Musicians get up on stage and preform with each other. Tommy Castro told the audience at the Sabor Jam that in 30 years of playing he has never seen anything like what happened at that jam between Matt Schofield and Ronnie Baker Brooks, both on guitars, and Curtis Salgado and Lee Oskar, both on harmonicas.

The heart of the Festival beats in the jams held at local bars and restaurants. "At the jams it is all improvised”, explains John. “There are no set songs. Somebody picks a key and things go from there. Festival musicians jump on stage with each other. You could get a jazz guy with a blues guy and you will see something very different. It is exciting for the musicians and the audience.”  Deanna Bogart tells John that when she played with some of the percussionists from Malamanya, a Latin Jazz band, at the 2016 festival, she learned more in three days than in the previous three years of playing.

“At the last festival we saw Ronnie Baker Brooks, Matt Schofield, and Tommy Castro, who are three of the best blues guitarists in the world jam together. You are just not likely to see something like that again”. Says John.

The 2017 Festival will be held February 9 - 12 in the town of Boquete in Chiriqui, Panama. Some bands currently confirmed are:

The Low Rider Band with Lee Oscar who are famous for songs like ‘Low Rider', 'Cisco Kid’ and ‘Spill the Wine’.

Dwayne Dopsie and the Zydeco Hellraisers will be bringing a little New Orleans flavor into Panama. With washboard, spoons and accordion, the blues will be receive a cajun treatment.

Also confirmed is Maria Rivas from Caracas, Venezuela. Who has been working professionally since the mid eighties. With extensive tours under her belt, Maria is known for fusing Hispanic & American popular songs with Jazz & World Music.

While the Bouquet Jazz festival is still a grass roots event, it has been drawing international attention. “News of what we are doing here in Panama gets spread word of mouth. Musicians talk about it. People talk about it. We have a lot of people come to Panama just to attend the festival. Last year we made the front cover of the Blues Festival Guide”.

The Panama Tourist Board and the Municipality of Chiriqui are also now recognizing the festival as an important event. “This means more promotion”, says John. For the 2017 festival the US and Canadian embassies will make us part of their cultural exchange programs, which means that we will be able to bring artists without having to jump through as many hoops, and spend less in obtaining visas”.

The underlying purpose of the Festival is the Music for Schools program. 100% of  festival profits go to local schools in order to support and improve musical education. “Our ultimate vision is to have the festival provide music teachers. We have a long way to go for that, but I think we can see it happen over the next couple of years.” Says John.

While the festival carries an easy going vibe, it takes months of planning and preparation leading up to it. While John Wolff has been part of the Festivals organizing team over the years, the 2016 Festival was the first year John Wolff stepped into the role of festival director. In talking about what it was like to put the festival together he said that “ it was challenging with a tremendous amount of work, yet very satisfying".

"The 2017 festival lineup will be slightly different", says John. "On Friday night we will use the Amphitheater instead of the Sabor restaurant to alleviate some of the crowds and on Thursday night we will do a jazz band in one bar and blues band in another. This will be the the first time we will have two jams going simultaneously at different venues”.

The Bouquet Jazz & Blues Festival will run February 9th - 12th in Boquette, Panama. Tickets are available from May of this year. Purchase early to take advantage of discounts. Watch the Festival’s web page for 2017 announcements: http://www.boquetejazzandbluesfestival.com