The acceleration of sea level rise 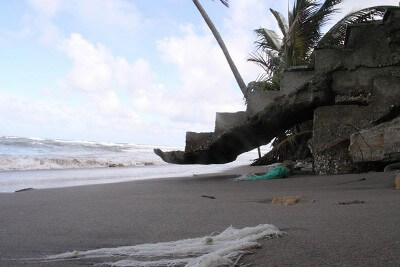 A new scientific analysis indicates that  Earth’s oceans are rising nearly three times as rapidly than throughout most of the 20th century.  The paper from the National Academy of Science is not the first to find that the rate of the rising seas is increasing, however the rate of acceleration that it reports is the largest.

Also largely underestimated is coastal erosion caused by rising sea levels, this is becoming more and more apparent on Panama’s Pacific coast as beaches and land erode. Owners of coastal properties have reported planting strong rooting trees like palms and almond trees to help with erosion and building break walls to slow the loss of land that persists each year. However, this is only a bandaid on a global issue that requires global action.

Scholar and researcher, S Dangendorf explained, “Sea levels will continue to rise over the coming century, no matter whether we will adapt or not, but I think we can limit at least a part of the sea level rise. It will further accelerate, but how much is related to how we act as humans.”