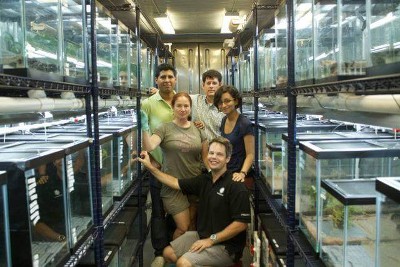 In less than a month, the Gamboa Amphibian Rescue and Conservation Center will begin the process of reintroducing amphibian species back into the wild. This will be the first time an amphibian born and raised in the center will leave the laboratory.

The Gamboa Amphibian Conservation and Rescue Center has managed to reproduce about 800 individuals of 8 species of amphibians. And after nearly a decade of research, scientists at the Smithsonian Tropical Research Institute (STRI) will being the reintroduction process of seven amphibians reproduced in the center in risk of extinction.

The Panamanian Amphibian Conservation and Rescue Project was launched in 2009 following the spread of chytrid fungus, an amphibian disease that affects the skin of frogs causing affixation and resulting in death.

The fungus began appearing in amphibian species around 2006 after which, conservations and scientists around the world began moving unaffected amphibians to conservation facilities called “amphibian arks” in an effort to keep endangered populations alive.

The first Panamanian Amphibian Conservation and Rescue Project was located in the Summit Municipal Park and then later moved to Gamboa.

Reproducing amphibians, a species that is characterized by its sensitivity to changes, is not simple, says biologist Gina Della Togna. She continues, "Although amphibians coexist, they have micro habitats.  Each species has a range of factors that can activate their reproductive processes, such as pressure, temperature.  They are a very sensitive species, the smallest change affects them."

Some 215 types of amphibians have been recorded in Panama and one third of them are in danger of disappearing.