ACP asked to take action against deforestation by North Properties 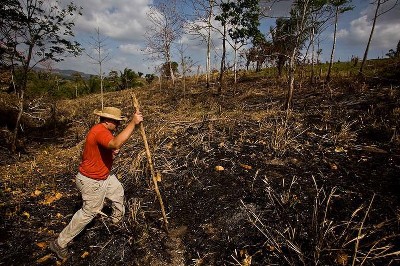 The Center for Environmental Awareness of Panama (CIAM) is asking to the Panama Canal Authority to revoke a concession granted to North Properties. The group's plea aims to see action against environmental damage in the watershed by requiring the company to reverse the effects of deforestation they have allegedly caused.

Environmentalists are concerned that erosion and runoff caused by the deforestation of the North Properties’ site will have serious impacts on the quality of the country’s drinking water resources.

CIAM expressed that they believe North Properties should be responsible for paying $830,000 in damages and that the ACP has a duty of protecting the Panamanian people by taking action on the issue. The amount of  $830,000 is seemingly tied to a report issued by the ACP in 2014.

“More than $ 830,000 was the estimated cost to restore the indirect direct environmental damage and of deforestation in the basin of the Canal in 2014, according to an inspection report of the Department of Environment, Water and Energy of the Panama Canal Authority (ACP).”

While CIAM claims the ACP was made aware of the problem by the report issued in 2014,  the ACP said the data has been “misinterpreted”. According to the ACP, the report "was an academic exercise to test a model of calculations in the framework of a training workshop, and therefore the document is not an official report of the ACP."

However, according to an article published by La Prensa this morning, an internal source at the ACP has confirmed that the 2014 report was part of a series of investigations being carried out into North Properties.

The Environmental State of the Panama Canal Watershed

Whether or not the ACP report was misinterpreted or not, what is clear is that the Panama Canal ecosystem is in need of greater protection. The area’s vulnerability and the negative effects of deforestation have been known for over a decade.

According to a report issued by the Smithsonian Institute in 1996, there is substantial evidence that forests can help protect water supplies by reducing runoff, aiding the storage of water through a dry season.

It is known that in dry season water can be scarce, both for the use of the Canal and as drinking water for the entire country. So it would seem clear that preserving the forests and reforesting areas affected by deforestation would be beneficial to the canal and the country. The benefits of forests are not only environmental, they are also economical and social.

“Sediments reduce the storage capacity of the lakes, and also require continual dredging so the Canal is deep enough for large ships. Wadsworth (1978) warned that the Panama Canal would cease to function if deforestation continued unchecked.”

Forests not only provide economic benefits through the continued functioning of the Panama Canal, but also to rural communities, supporting fishing and hunting and providing rural people with forest products like firewood, food, and medicines. Forests also help sustain mammal and bird populations. With thriving animal diversity, tourism increases.

It is known that the Panama Canal ecosystem has extremely high species diversity. By preserving tree diversity in the watershed animal diversity can also be maintained.