Killer whales on the Caribbean 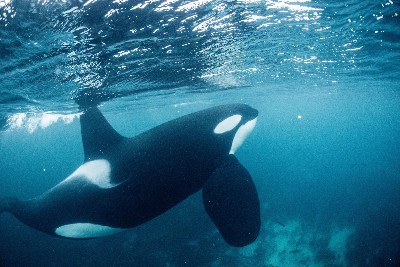 Did you know that orcas (Orcinus orca) , commonly referred to as killer whales are found in all oceans of the world? Despite their wide distribution, most of the knowledge we have on the species comes from studies conducted in higher latitudes, few studies have been done on orcas inhabiting the Caribbean.

One of the reasons there is little information on the Caribbean population is because there are likely not very many of them, only 145 sightings of killer whales have ever been recored in Caribbean waters. Of those sightings, only 13 were in the Western Caribbean (Belize, Costa Rica, Guatemala, Honduras, Nicaragua, Panamá and the Caribbean side of the Yucatán Peninsula).

These sighting took place year-round, with a average group size of 3 or 4. Caribbean Orcas have been recorded preying on, sea turtles and marine mammals and possibly fish.

In a review on the Caribbean population, “Distribution, feeding habits and morphology of Orcinus orca in the Caribbean Sea” a video taken of the coast of Colon, Panama is highlighted. The video speaks to the feeding habits of this population, leading researchers to believe that fish could be part of their diet. In the video a pod of orcas are seen feeding on bonitas thrown to them from people fishing off the coast of Colon.

Interestingly, prey preferences tend to be distinct among different groups of orcas. According to Smithsonian researchers some groups of orcas have been recored eating chinook and chum salmon. While “Transient” orcas, which roam more widely, are known to hunt for larger marine mammals like seals, porpoises and sea lions. “Offshore” orcas, which are found ten miles or more from shore off the coasts of Alaska to California, are known for eating shark. In fact shark makes up such a large portion of their diet that their teeth get worn to the gums from chewing the skin. Finally, in Antarctica, one orca population is recorded preying on penguins, while another specifically on minke whales.

Skip to 1:00 for orcas feeding on fish. If you have children in the room who understand Spanish or if you are sensitive to explicit language mute the video.