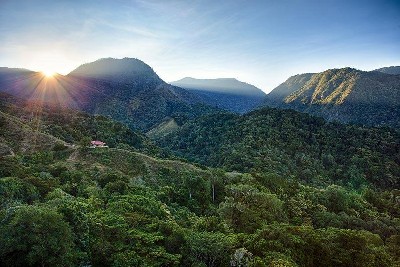 The 40th session of the UNESCO Heritage Committee stated on Sunday July 10th, where a team of UNESCO members will be meeting in Istanbul, Turkey to decide if La Amistad National Park will hold on to it’s status as World Heritage site or join a growing list of sites at risk.

La Amistad National Park, located between Panama and Costa Rica, is currently one of 28 parks recognized as a UNESCO World Heritage site.

La Amistad park stands to be included on the list of threatened world heritage sites, if this happens it would become the second heritage site in Panama to be placed on this list. The first being the forts in Portobello and San Lorenzo. The park stands to lose it's status for a few reasons.

One of the major recommendations Panama and Costa Rica received at the 39th session of the UNESCO Heritage Committee was to develop a joint environmental management plan for La Amistad International Park. In the plan impacts of live stock and agriculture, potential road construction and the construction dams would be examined.

Following the 39th session of the UNESCO Heritage Committee the commission stated their concerns about the construction of the Bonyic dam without prior consideration of the results of a comprehensive Strategic Environmental Assessment (SEA), urging Panama and Costa Rica to develop an assessment. In response Panama and Costa Rica created a report of the Strategic Environmental Assessment (SEA) for the World Heritage Site Talamanca Range - La Amistad Reserves / Amistad International Park (Costa Rica - Panama) in 2015.

The 40th session of the Unesco Heritage Committee

Currently the report, created jointly by Panama and Costa Rica is under review at the 40th session of the UNESCO Heritage Committee. A delegation from Panama is attending the meetings in Istanbul which will last 11 days.

During the first day of meetings, Director-General Irina Bokova said "When a world heritage site is destroyed, we are all diminished.” It is vital that these sites be protects and their home countries create plans for rejuvenation when they have been damaged.

The goal to keep the park's accreditation will require a regulatory plan which creates road maps and develops policy for distributing population, land use, roads and construction.

A major concern UNESCO has for the Amistad International Park is the potential impact of dams in Panama. At least two watersheds (Changuinola and Bonyic) could be affected by the construction of dams, for this reason Panama has been asked to report on monitoring programs that will aim to minimize the loss of biodiversity.

UNESCO urged Panama to stop development on the new hydro-power project on the Changuinola river until 1) A Strategic Environmental Assessment for the property had been completed and 2) They had received informed consent from indigenous communities having territorial rights in the affected lands.

While the new hydroelectric project, is just outside the property lines of the world heritage site the impact it could have on aquatic fauna and the land inside the boundaries of La Amistad National Park is noteworthy. However, it is too early to tell what this affect will be, based on evidence and science. It is only with continued research and monitoring that the mid and long-term effects can be assessed. That being said, by the time these results are verified and it can be determined that the biodiversity of aquatic wildlife has been damaged, the damage could be irreversible.

The Impact of Livestock in La Amistad National Park

According to the 2015 report on the area, the extent of land currently in La Amistad National Park devoted to livestock is less than 1% of the total area. While this percentage is considerably low, the impact on La Amistad National Park should be considered. It is important that education promoting sustainable management of livestock continue and that organizations helps to conserve natural resources while reporting statistics including number of families, cattle and methods of farming.

The Creation of Roads through La Amistad National Park

Despite a Strategic Plan from 2010 - 2014, in which the Government outlined plans to connect the provinces of Chiriqui and Bocas del Toro, it has been stated that no roads will be built through La Amistad National Park. According to the recent report submitted, the current government has no plans of developing the previously planned road. There has been no environmental impact study on building a road through La Amistad National Parlk.

The case of Portobello

Currently Panama has set new goals for its plans to maintain the Portobello and San Lorenzo forts, which have been included on the list of threatened world heritage sites. The restoration plans' previous deadline of 2012 - 2015 has been changed to 2016 - 2019. With this renewed commitment Panama aims to show the countries’ goal to see through promised improvements to the site.

Historian Rommel Escarreola says “we must preserve the value of sites like Portobelo and Casco Antiguo in Panama, because they concentrate much of our culture and history.”

These marks of historical importance are also hidden in La Amistad National Park where the reminisce of Quaternary glaciers remain, having allowed the fauna and flora of North and South America to interbreed.  Four different tribes live off the land and pre-ceramic archaeological sites offer evidence that that the park has a millennia long history of human occupation.

UNESCO advisory body, the International Union for the Conservation of Nature (IUCN) reports that the management in La Amistad International Park "has not improved" and suffers from a lack of funding required to ensure its conservation. Over the next week the committee will deliberate its fate.