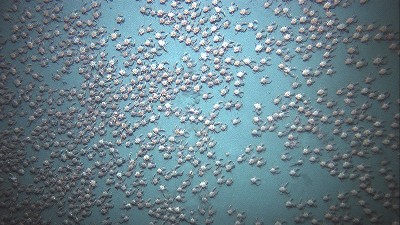 Scientists recently discovered a cloud formed of thousands of crabs on Panama's seafloor. The swarm was like nothing that has every been recored. Jesús Pineda, a biologist at the Woods Hole Oceanographic Institution in Massachusetts and the lead author of a paper on the crabs published on Tuesday, explained that he pored through scientific literature, looking for similar behavior among the many kinds of crabs, lobsters, shrimp and marine creatures that dwell near the bottom of the ocean, but found nothing of this nature.

His team of researchers were studying life at the Hannibal Bank Seamount, an underwater mountain off the Pacific coast of Panama, when they stumbled upon the activity. Their findings have since been published in the journal PeerJ.

The crabs have been identified as Pleuroncodes planipes, better known as the red crab or tuna crab, each about only one to five inches long.  Previously the species’ range was thought to be restricted to the waters off the southern coast of California and Mexico.  Pineda explains that the discovery of a swarm of the crabs so far south and in such huge numbers “is very unusual”.

The Hannibal Bank Seamount is an underwater mountain – less than 1% of such mountains, dotted around the Pacific with volcanoes, sea vents and bizarre varieties of life, have been studied.
Pineda’s team also found octopuses, rays, scallops, soft corals and colorful sea urchins, and they plan to return for more study. They are also using underwater drones to map the mountain and the water currents around it.