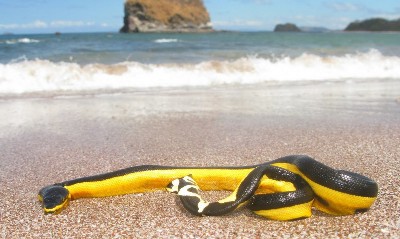 A large number of Pelamis platura sea snakes, commonly known as yellow-bellied sea snakes ave been appearing on beaches in the province of Los Santos, specifically in Pedasí.

While the increase in prevalence has caused concern among some, residence in this area say that the increase is common in these months. The snakes swim towards shore in an attempt to escape the colder currents.

The sea snake is gray with side lines of bright yellow, they should be left undisturbed as their venom is highly potent and can cause neuromuscular paralysis.