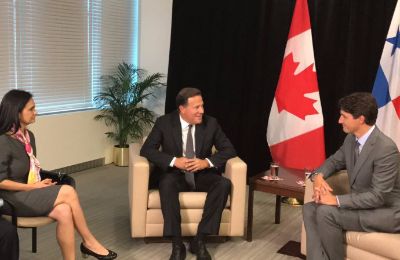 The meetings held in the framework of the 72nd session of the United Nations General Assembly in New York also led to a meeting with the President of Andorra, Antoni Martin, with whom Panama negotiated an agreement to facilitate the recovery of assets in relation to Odebrecht.

In a press release, it was stated that the meeting brought formal negotiations between foreign ministries and aviation authorities in Panama and Canada to increase air connectivity between the two countries in an effort to boost tourism and investment.

In their meeting President Varela and Prime Minister Trudeau agreed that the relations between the two countries have strengthened, committing to make the necessary moves to to reach their short-term agreements.

During the various bilateral meetings, President Varela was accompanied by the vice president and chancellor, Isabel de Saint Malo de Alvarado; the Director of Foreign Policy, Nicole Wong and the Minister of Economy and Finance, Dulcidio De La Guardia.