Inauguration of the Chinese Embassy in Panama 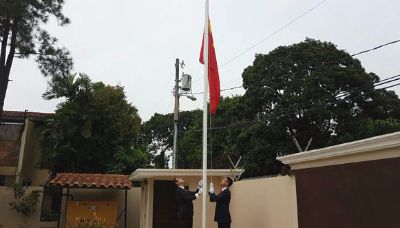 The Embassy of China in Panama was inaugurated Sunday, September 17, 2017. The new Embassy in Panama comes after the establishment of diplomatic relations between Panama and China.

The establishment of these relations occurred on June 12, 2017. The inaugural event, led by Juan Carlos Varela and Isabel de Saint Malo de Alvarado, included the signing of the memorandum of the understanding of political consultation mechanisms.

During the inaugural event, President Varela said that the relationship between Panama and China is based on mutual respect, honesty, dialogue and reciprocal benefit. Varela thanked the Chinese community in Panama for their contribution to the country's development.