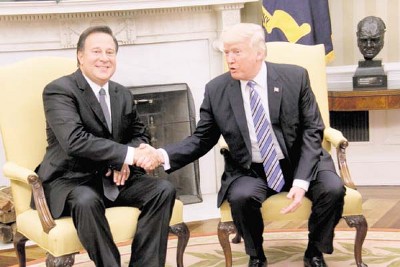 President Juan Carlos Varela has announced a meeting between senior officials from the U.S. and Panama to discuss the issue of security and the fight against drug trafficking. The meeting will be held in two weeks in Panama, according to a report by Panama America.

"I am concerned that in such a short time that security meeting in Panama has been scheduled after the meeting with Trump ... that means that it was already cooking.”

"This new meeting seems to suggest the presence in Panama of some contingent of US troops, who are not necessarily military, to travel to Panama," he continued.

The former ambassador’s remarks come after a strong message was reported by the press in Panama through an open letter which warned against the return of a US base in Panama.