A Plee for Playa Paunch 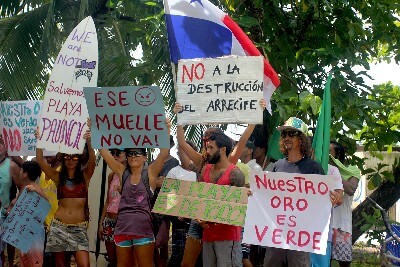 120 protestors took to Playa Paunch in Bocas del Toro on World Oceans Day, to protest a pier that could endanger one of the best waves on the Caribbean coast.

A picture of the protest posted on Instagram went viral reaching top names in the surfing world like Kelly Slater, who began helping spread international awareness on the issue.

Bocas residents reported a construction crew offloading rebar onto the beach and hauling it out into the ocean to install it into the reef the day prior to the protest. This was a surprise to the residents and local government agencies, as there were no plans approved for this type of development along this stretch of coast.

“Originally, the owner of this property [the villa/hotel fronting Playa Paunch known as “La Coralina”] had received approval from government agencies in Panama City to build a small personal dock, which are typically 12 to 15 feet long” explains Scott Balogh owner of Red Frog Bungalows. “But the local government was never notified [they also never signed off on the project] and the building plans they showed up with contained the blueprints for a 130-foot, T-shaped, multilevel pier with concrete pilings drilled right into the live reef––completely different than what they applied to get permits for.”

Balogh explains that the development on Paunch will not only negatively affect the wave and the surfers but the livelihood of boatmen in the region as the project would go right through the area where boats anchor. The community’s efforts were successful as the rebar was promptly removed from the reef, however, according to locals and international coverage the fight to save Paunch continues.

According to a report published in Surfer Mag, Friday morning the construction crew was back clearing trees and digging with heavy machinery. The mayor and the local police were able to stop them, warning that they didn’t take the necessary steps required to build a pier this size. When the property owners procured the permits to build a small dock, they didn’t need to go through the environmental impact statement (EIS) process––because short, personal docks don’t require one.

However, large piers do. While Paunch was lucky (and known) enough to gain some global attention is not the only wave endangered by development. A pier was recently built at Costa Esmerelda to create a manmade beach for residents. The A-frame that breaks left and right on Panama’s Pacific, while less impressive than Paunch, is a great wave that is frequented by avid surfers in the area. However, the pier has completely cut off the left.

Surfing is one of the major contributors of tourism in Panama, especially Bocas del Toro, so destroying waves to create sand beaches and docks is not a smart move, not only from an environmental stand point but also an economical one.