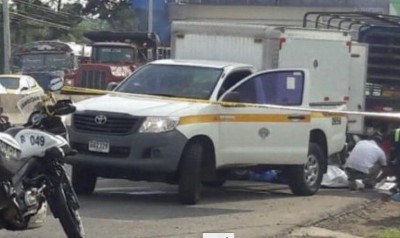 Two accidents claimed the lives of three people on the Pan America highway in La Chorrera, Panama West on Friday June 2. Another two people were injured.

The first fatal accident was recorded at 12:30 am in the vicinity of Pesa de La Chorrera when the driver of a red sedan heading for Panama city  lost control and rolled into a  ditch.
The driver Daywi Omar Fuentes, and his companion Elvin Marquínez died at the scene. Both were 33 years old.

At  5:30 am in La Espiga, Luis Bravo, 57 years of age and some companions were about to board a truck that would take them to work when the driver of a busito lost control. Bravo who was standing at the back of the truck was killed instantly.

Another worker and the bus driver suffered minor injuries and were taken to the Hospital Nicholas A. Solano.