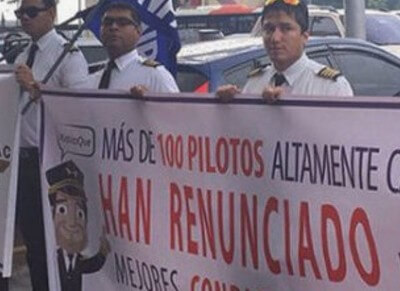 Pilots from the Panamanian carrier Copa Airlines demonstrated for better working conditions and increased pay Thursday May 25 in front of  the Ministry of Labor and Development (Mitradel).

The Copa Airlines pilots were  supported by flight attendants and aviation mechanics. Currently the Panamanian Union of Commercial Aviators (Unpac) are negotiating with representatives of the airline. However, Unpac members announced that if they did not reach an agreement with the airline, they would be withdrawing  labor on On June 14.

According to Unpac, in addition to the 60% salary adjustment they are demanding from the airline, the pilots want  the duration of the working day to be established in their contracts.