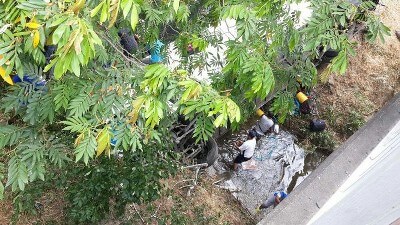 Sunday March 5th at approximately 2:15 p.m. a bus traveling from Bocas del Toro towards Panama City over turned on a bridge into the Las Guabas river.

The accident took place on the InterAmerican highway in Ciénaga Vieja, in Antón, in the district of Coclé, leaving 18 people dead and 37 injured.

Directory of SINAPROC, Jose Donderis, reported that the passengers were workers form the Ngabe Bugle comaraca traveling to farming jobs in Chame.  The bus was carrying more than 50 passengers, authorities said. Of the 18 who died, all were middle aged males. Sixteen died at the scene, while two died later at the hospital. Another person remains in critical condition, Civil Defence Director Jose Donderis said.

According to reports the driver lost control near the Health Center in Cocle and plunged into the river. Firemen and rescue teams from the Emergency Task Force  were called in from surrounding areas to assist passengers trapped inside the bus and helicopters arrived to help ferry the injured to  different hospitals in the region as local hospitals were quickly overwhelmed.

Gilberto Samaniego National Police Commissioner of Panama West, and a member of the Joint Task Force, said injured passengers were being transferred to the Nicolás Solano Hospital in La Chorrera because the medical centers of Anton and Penonomé were  at their maximum capacity and could no longer accept patients

President Juan Carlos Varela decreed Monday, March 6th will be a day of national reflection to honor the memory of the victims. He has ordered a minute of silence in the schools. Labor Minister Luis Ernesto Carlos has started working a plan to offer assistance to the family of victims.

We send our condolences to those who lost loved ones in this tragic accident.