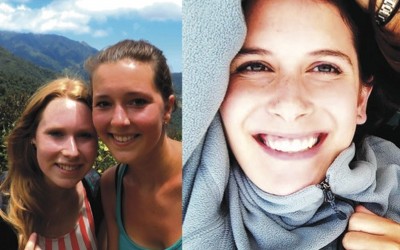 According to a confidential source, the recent murder of Catherine Johannet could be related to the case of the two Dutch tourists declared missing April, 1 2014.

The source revealed to Panamá América February 8th 2017, that the FBI had uncovered a possible connection to the deaths of the Dutch women, Lisanne Froon and Kris Kremers and the recent murder of Catherine Johannet.

Johannet’s body was found about 35 miles from where the remains of Kremers and Froon were discovered February 5th 2017. Johannet was last seen alive at around 10am on Thursday February 2nd on Colon Island.  That morning, she traveled by water taxi to Bastimentos Island, where she had been planning to spend the day on Red Frog Beach.

Staff at Johannet's hostel on Colon Island reported her missing after she failed to return from her day trip, according to Newsroom Panama.

The Dutch tourists were hiking on the El Pianista trail between Chiriquí and Bocas del Toro. While it was never determined that there was foul play in the deaths of Dutch Lisanne Froon and Kris Kremers, information has surfaced in the current US investigation that points to a connection between their murders and the murder of US Catherine Johannet. What that connection is however, is unclear.

All that has been said is that the suspect, acting primarily in the dry season in western Panama, could be responsible for the three murders.

Foreign journalists have also implied that Panamanian authorities are being secretive about the death of Catherine Johannet, a fact that could point to the relation between her death of that of the two Dutch girls. Despite very little information being released some facts have been leaked to the press in Panama.

According to Nex Noticias the autopsy found that Johannet was strangled to death with a piece of her own clothing. Other sources also reported that she was beaten, and her body dragged. The autopsy by the Panama’s Institute of Forensic Medicine and Forensic Sciences of the Public Ministry was completed Wednesday February 8th, her body is expected to be returned to the United States soon.

It has also been released to the public that eight people from Bastimentos Island, have been detained in the investigation being carried out following the death of Catherine Johannet. However, no information on the possible suspects have been released. Authorities of the Public Ministry and the National Police continue to carry out raids on the island.

The National Police have also reported that they will increase the number of agents in Bocas del Toro in order to strengthen security, mainly on the island of Bastimentos.