Varela says Corrections will be made to Christmas Food Fairs 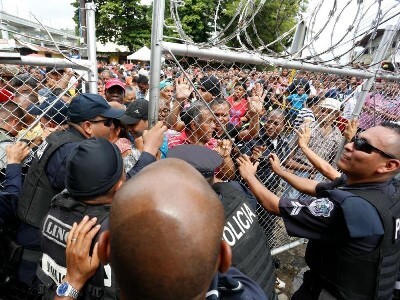 On Wednesday, December 14th the Institute of Agricultural Marketing (IMA) Christmas food fair in At Pan de Azúcar, San Miguelito, got out of control and required police to restore order.

According to reports people had been in line since 2:00 a.m. waiting to get their hands on an $8 ham among other discounted Christmas staples, which INA was to start distributing starting at 9:00 a.m. However when the gates opened, the crowed was completely out of control, eager to not miss out on the opportunity to buy a ham.

According to reports, the chaos escalated due to the fact that tickets for the sale of hams and rice were sold out. While, the tickets were distributed  to maintain order at the fair and to support the staff of the IMA, this seemingly backfired.

According to La Prensa, this is not a first, other fairs including the Neuvo Tocumen fair were similarly disorganized. Fairs are also taking place La Chorrera and Chilibre.

President Varela has issued a statement to apologize for the lack of organization that lead to the events on Wedneday December 14th. The president assured that the Agricultural Marketing Institute (IMA)  and the Ministry of Agricultural Development (MIDA) would take action on the matter, ensuring future food fairs would be more organized.

According to the IMA, the NaviFerias food fairs will be from Tuesday to Saturday during the month of December, from 9:00 a.m. to 1:00 p.m. inSan Miguelito, La Chorrera, Chilibre and Nuevo Tocumen. Members of the National Police will be installed to maintain order.