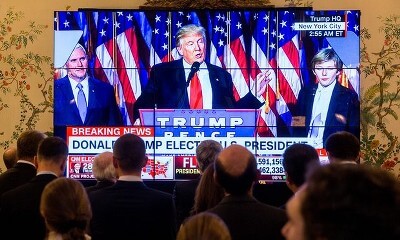 The group in search for refuge from what the country could become was so large the website for Citizenship and Immigration Canada crashed. Panama's top news site La Prensa reported on the matter.

While the Canadian immigration site continues to receive increased traffic and outages, other countries, including New Zealand have begun reporting an increase in traffic to their websites with inquiries for residency visas from US nationals.

Here is how Panama reacted to Trump winning:

The government of Panama offered Trump a congratulatory greeting this morning and reiterated their willingness to strengthen relations with the United States.

La Prensa published an article this morning with a statement issued by the Foreign Ministry of Panama saying "the Government and people of the Republic of Panama congratulate the people of the United States of America for their democratic vocation, demonstrated once again in the celebration of the presidential elections, and greets the President-elect Donald Trump and the Republican Party for victory. "

The statement continued that the Panamanian government reiterated their willingness to continue their "historic relations of friendship and cooperation" between Panama and the United States especially in areas of great mutual interest including economic relations, security, and peace.

Juan Carlos Varela tweeted at 8:56 a.m. this morning Congratulations to the people of the United States for their democratic vocation and President-elect Donald Trump for his victory.
Russia President Vladimir Putin was among the first to congratulate Trump, expressing his hope to restore Russian-American relations.

Here are some reactions from other world leaders:

While there was no official reaction from Cuba, the county announced five days of military exercises in an effort to prepare for the possibility of "enemy actions". This is based on the possibly that Trump could reverse Barack Obama's moves to open relations with the island nation.

Prime Minister Justin Trudeau said, "Canada has no closer friend, partner, and ally than the United States.” Mr. Trudeau said he looked forward to working with Mr. Trump on trade, investment, international peace, and security. The Globe and Mail, a popular Canadian newspaper brought to light that the result may complicate Prime Minister Trudeau’s goal of forging a North American energy and climate strategy.

President Enrique Pena Nieto said he is ready to work with Mr. Trump. Rafael Garnica a 29-year-old technology entrepreneur from Mexico said “we have to start saving for that wall,” he continued “it's not just Trump that frightens me, it's what he represents."

Benjamin Netanyahu said that he is certain the two countries, Isreal and the United States can work together to "reach new heights" in bilateral relations.

Matteo Renzi was one of the few world leaders to publicly endorse Hillary Clinton. However, he said, "the friendship between the two countries remains strong and solid".

The president said he hopes relations with the US will continue to improve. "We are allied as part of NATO and I will strive for the friendship and the alliance to deepen further," Boris Pahor said.

President Xi Jinping said that he looked forward to working with Mr. Trump. "I highly value China-US relations, and look forward to working together with you, and holding fast to mutual respect and non-conflict, non-confrontation," he said.

The president said he would work with Mr. Trump's administration. "We will keep good relations, especially in trade and investment as we know the U.S. is one of Indonesia's major investors. I think there will be no change," said Joko "Jokowi" Widodo. However noted Indonesian Islamic scholar, Komaruddin Hidayat stated that Mr. Trump’s backing for ultra-nationalist, isolationist and protectionist policies could be harmful.

Prime Minister Shinzo Abe has sent "heartfelt congratulations" to Mr. Trump. "As a very successful businessman with extraordinary talents, not only you made a great contribution to the growth of the US economy, but now as a strong leader, you have demonstrated your determination to lead the United States," he said.

With varies reactions from world leaders, it is clear that there is a level of uncertainty as to how President Elect Trump will affect the relationships the United States currently has with foreign countries.