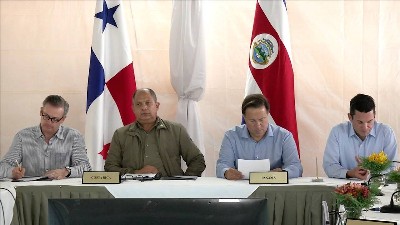 Juan Carlos Varela and Luis Guillermo Solis, presidents of Panama and Costa Rica met for a Binational security meeting Friday, October 7th in Boquete, Chiriqui province. Among the topics covered were migration and securing the boarders between the two neighboring countries.

The meeting began at 9:00 a.m. and continued until noon and focuses primarily on the transit of migrants. Since 2015, thousands of migrants, primarily Cubans, Haitians and Africans have crossed the isthmus en-route to the United States. These migrants have endured harsh weather, insecurity and disease.

In an effort to eat with the migration crisis affecting the two Central American countries an agreement was signed by Luis Miguel Hincapie, Panamanian Deputy Foreign Minister and his Costa Rican counterpart Alejandro Solano Ortiz at the the Security Council.

According to the agreement the countries will work to work together thought coordinated ministries of security and foreign ministries that maintain an exchange of migration alerts and cooperation though the exchange of security information. Furthermore both countries will work towards the construction of facilities at the border between Panama and Costa Rica better intelligence sharing capabilities.

"We concluded the meeting calling on the security agencies of both countries for greater integration, coordination, information exchange is the document that was signed to be alert of what is the migratory flow and people that somehow it could represent some risk on our countries ", he said.

Also Solis, President of Costa Rica explained that the meeting concluded with greater integration and coordination between the two countries in order to document the migratory flow of people that could pose a risk to the countries of Panama and Costa Rica.

Both leaders work to continue to create open lines of communication with other countries to explore the possibility of identifying those who are willing to host migrant groups in order to “coordinate their voluntary relocation, safe conditions and guarantee them their human rights.”

President Juan Carlos Varela explained that Panama will be sending a high-level commission to Nicaragua where he will hold a meeting with the authorities of that country to assess coordination on immigration. Furthermore a meeting with the President of Colombia, Juan Manuel Santos, on October 25th 2016.

According to an article published by this morning by Telemetro, from January 2016 until September 2016, it is estimated that 9,000 migrants have travel through Panama attempting to reach the United States.