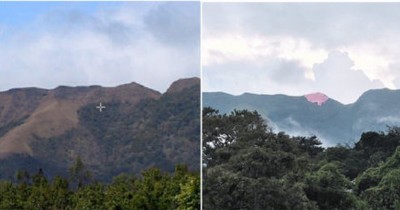 The pink blanket, made from a vinyl material covering the hillside of the "Sleeping Indian" a mountain peak in El Valle de Anton, is being removed. The pink tarp, placed on the mountain side by the office of the first lady, was part of a campaign to raise breast cancer awareness during the month of October.

The removal process began Friday, September 23rd, as the installation sparked a debate on how it would affect the environment.

The campaign, with a total cost of $300,000 included the installation of the vinyl tarp covering 720 thousand square meters of the mountain, along with cables and steel rods to support lights and electrical panels.

According to the official technical report of the campaign, the funds donated by the Embassy of Taiwan would also go towards producing two videos with messages about the importance of breast cancer awareness and preventative screenings. Furthermore, the money would facilitate five days of talks on health awareness and prevention of cancer along with the transfer of mammography equipment to health centers in Lidice, Capira, Bejuco, Chame, Coronado, San Carlos, El Valle de Antón and Penonomé.

However, some still feel that the funds could have been better allocated. An article published by La Prensa spoke to the fact that the budget would more than cover the purchase of medical equipment the country lacks. “With this money, for example, the country could have purchased a digital mammography machine, which most public hospitals throughout the country do not have."

When asked about the removal of Panama’s breast cancer awareness installation the first lady explained the real matter at heart was not the pink tarp, it was the importance of breast cancer screening, “debate all you want" she said, "like #laindiadormida or don’t like it, just go get an exam.”