Deforestation and environmental damage of the Panama Canal watershed 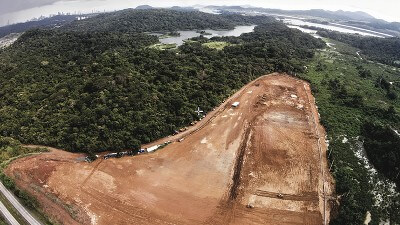 The Panama Canal Authority (ACP) has asked North Properties, a company developing on a 5.8-hectare site near the canal watershed, to present a remediation plan to reverse the effects of deforestation. If no plan is presented, the ACP will suspend work at the site. Work could also be suspended if the plan is deemed to be insufficient.

The ACP is asking for the remediation report as the project, approved in January 2015, has caused a large amount of sediment to enter the water, which could constitute a health risk. In addition to erosion, the agency found a number of other health risks including to garbage on the site which creates a breeding ground for mosquitoes.

The ACP has now taken a stance on the project due to it directly affecting the canal and it’s potential to contaminate the Caimito River, which empties into Miraflores Lake, which is in the Panama Canal basin.

According to an article published by La Prensa yesterday, deforestation was also reported on 1.3 hectares outside the North Properties estate.