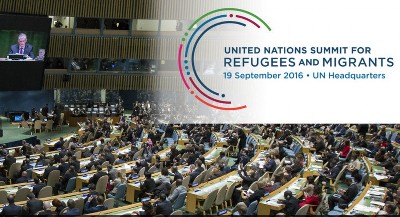 This week Panama’s president Juan Carlos Varela joins world leaders in New York for the United Nation’s 71st General Assembly. This year the global endeavor takes the form of a “twin summit”, with a conference on refugees and migration will take place Monday, September 19th.

The conference began with the goal of creating a shared responsibility for groups of people in need of protection. While the conference was born with the suggested commitment to resettle 10 percent of the world’s refugees each year, many found this goal unattainable. The conference continues with high hopes of reaching an actual agreement by 2018.

A second summit, hosted by U.S. President Barack Obama among leaders from several other nations as co-hosts, will work to create concrete commitments from governments to assist asylum seekers.

According to the UN refugee agency, the scope of is the challenge is huge, with the number of refugees and asylum seekers reaching 25 million worldwide last year. Moreover, last year 41 million people were forcibly displaced within the borders of their own countries. An article published in the Globe and Mail brought this shocking statistic to reality revealing that “together this means that 1 out of every 113 people on earth has left their homes due to conflict.”

Another interesting point the article brought light to was that the responsibility to carry refugee populations often falls on the countries that are least capable of carrying it. “A recent analysis by Oxfam found that the six wealthiest countries in the world, which together account for more than half of the global economy, host less than 9 percent of the world’s refugees. By contrast, Turkey, Pakistan, Lebanon, Iran, Ethiopia, Jordan, Kenya and Uganda host more than half of global refugees, according to the UN.”

Panama at the UN Summit for Refugees and Migrants

During the talks leading up to the conference, Juan Carlos Varela met with Secretary General of the United Nations Ban Ki-moon requesting support to reduced the flow of Haitian migrants traveling through Panama with the hopes of arriving in the United States.

A bulletin issued by Panama’s Ministry of Communication spoke to Varela’s request for support from the Government of Haiti to prevent migratory flow from the island. UN General Ban Ki-moon, acknowledged humanitarian work being done in Panama, including the creation of two shelters in the Darian for migrants traveling through the area. As of August 5 2016, a total of 800 migrants from Cuba, Haiti and Africa were stranded in Darien.

During the first summit of the conference, Varela  and  Luxembourg  Prime Minister Xavier Bettel will co-chair the roundtable: Response to large movements of refugees. Panama’s president will also be seated at the table: Global Compact for safe, regular and ordered  migration towards 2030.

Varela will hold a bilateral meeting with Costa Rican President, Luis Guillermo Solis, this meeting will speak to migration and security issues that concern both countries. The president will take part in talks with the presidents of Colombia and Peru, Jamaican Prime Minister Andrew Holness and the head of the Center for Regional Strategy World Economic Forum, Philipp Rösler.

"Migration is the new global problem,” she said, “It will not be resolved with the actions of one country, but rather through joint actions of the international community and we are walking in that direction.”

Wednesday, September 21st, Varela will attend a meeting which will speak to bringing the Paris Agreement into action. Panama will play an integral role in the ratification of the United Nations Framework Convention on Climate Change agreement, that deals with greenhouse gasses and emissions mitigation.