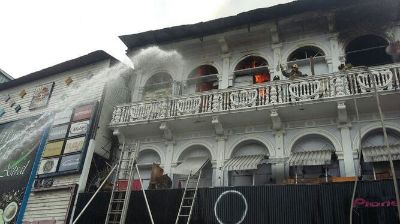 Firefighters worked for over two hours to control a fire in one of the buildings in Plaza 5 de Mayo, Calidonia this morning (Sunday, July 24). The fire, reported at about 10:30 a.m. has affected about 60 people, a number of which were foreigners who sell crafts in the neighborhood.

La Prensa spoke with one of the affected residents, Alfonso Lechón. Alfonso is originally from Ecuador, and has been in Panama for 15 years. He told La Prensa that he lost about $80,000 in merchandise in the fire.