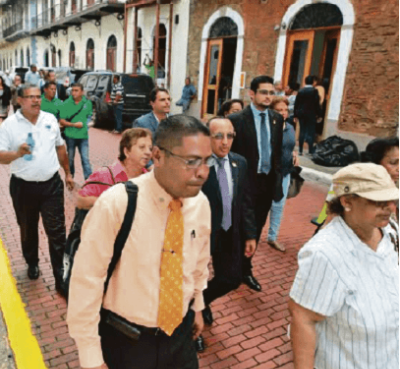 Friday July 22, 2016, President Juan Carlos Varela held a cabinet meeting to present the 2017 education budget draft. The budget of $21 000 670 million was approved by the cabinet. The budget allocated $80 million  to raise salaries.

After announcing the new budget, President Juan Carlos Varela asked that teacher unions return to school next Monday, July 25th. Magisterial leader Yadira Pino has stating that no agreement has been reached, and despite Varela’s announcement, the strike continues.

The residential spokesperson, Manuel Dominguez, took to Twitter Saturday to continue the dialogue between educators and the government.

In a press conference following the Cabinet Council meeting President Juan Carlos Varela explained, now that the education budget of 2017 has been passed, it is time to discuss how to improve the academic side of the education system in Panama.

The president reiterated the need for the strike to be suspended and teachers return to school starting next Monday.

While the president addressed the country, the magisterial leadership awaited his return to continue negotiations. Issues still being addressed at the continued negotiations included the wage increase, the allocation of 6% of GDP to the education sector and improvements in a number of schools.

While the negotiations continue, the Ministry of Education (Meduca) is looking at how teachers will recover the hours of classes that have been missed during the week long strike. In total, 670 thousand students of the public school system have been affected by the strike.

Minister of Education, Marcela Paredes de Vasquez, spoke to three proposals which the ministry had evaluated. The various plans involved, time bring recovered throughout the school year, lengthening the school year, cutting out recess time and school on Saturdays.

Paredes explained that the final measure that Meduca will take to make up for the lost time will be decided after the ministry knows the total number of lost days.

With that in mind, the Minister of Education also called for teachers to stop the strike. A strike, he explained, that has greatly affected the student population.

In response to the drawn out teacher's strike Marcela Paredes de Vasquez says, “four different proposals have been turned down by the magisterial leadership, instead the declaration of an indefinite work stoppage came last Thursday, it is unnecessary and unjustifiable. "