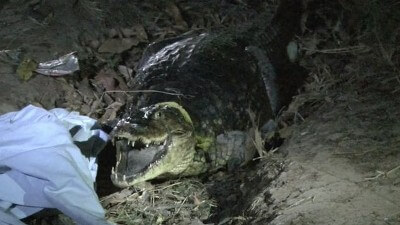 A home owner in Panama West, in the neighborhood of Jorge Santos, La Chorrera, was shocked to find a large cayman in the gutter in front of her house last night. Locals reported that this is the third time this situation has occurred in the area.

Residents were alerted by a dog who was barking nearby. The owner of the house, which the cayman was in front of, reportedly came out of her house shouting, alerting other neighbors who tried to scare the large animal which was trying to attack the dog.

Residents have asked authorities address this situation, and to identify where the animal came from.