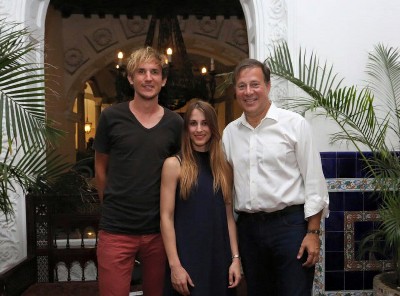 Friday February 26 President Juan Carlos Varela, was walking with his bodyguards in the district of San Miguelito when he witnessed a mugging.  El Silo reported that with the help of his security staff, Varela was able to prevent two German tourists from being robbed in Altos de Curundú.

El Siglo spoke to a animated response from critics. They say, Varela "removed his tortoiseshell", and as a whole he and his staff became “superman” quickly detaining the bad guy. El Siglo published photographs of the incident showing an “indignant” Varela and the offender.

President Varela is picture here with the two German tourists, Jonah and Andrea on their recent trip to the presidency. A trip that the president says was to “show gratitude for their visit to Panama and reiterate the country’s tradition and hospitality.” The photo was shared by Juan Carlos Varela via social media.