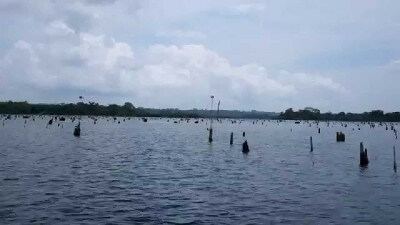 This February the Panama Canal Authority (ACP) reported that Gatun and Alajuela Lakes will reach their lowest levels in 103 years. Gatun was created in 1914 and is  1.4 meters below the level which was recorded for that date.

Alajuela Lake, created in 1935, is 3.4 meters less than the level it should be at, according to the ACP.

La Prensa reported that the decease in water level is attributed to the phenomenon of El Niño, among other things, extending the dry season with less rain in the Pacific. In a recent report La Pensa explained that between May and June Gatun and Alajuela lakes will reach their lowest levels and the picture will be difficult. The situation is critical for the Canal, but also for human consumption because nine water treatment plants take raw water from the  lakes.

Next month the ACP  will need to decide whether is restricting vessels will be necessary. This timeline is in an effort to give carriers time to make the necessary adjustments to their freight plans says, Carlos Vargas the  ACP’s vice president of Environment, Water and Energy reported.

One of the other measures that could be implemented is the reduction of the number of cargo vessels transiting  the Canal and major conservation programs to conserve water for human consumption.
It is not only panama struggling with water scarcity. According to an article published in the guardian “at least two-thirds of the global population, over 4 billion people, live with severe water scarcity for at least one month every year, according to a major new analysis.”  The new research published in the journal science advances, also spoke to places where water consumption is double the amount of replenished water from rain, which leaves underground aquifers extremely vulnerable.

Prof Arjen Hoekstra, at the University of Twente in the Netherlands and who led the new research says:

“Taking a shorter shower is not the answer” to the global problem as just 1-4% of a person’s water footprint is household, 25% is via meat consumption. It takes over 15,000 liters of water to make 1kg of beef,  almost all of that is to irrigate the crops that go to feed the cattle.

Hoekstra explain that in an effort to preserve water caps should be made on water extraction from all river basins and companies need be transparent about how much water is needed to produce their products.