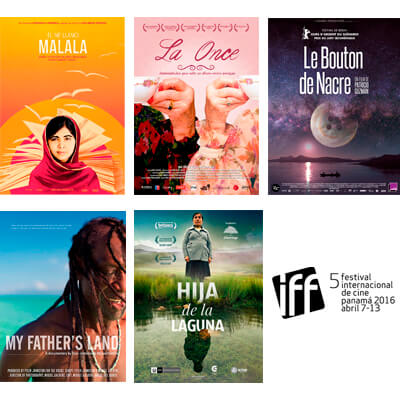 The documentaries for this year’s Panama International Film Festival (IFF) were recently announced. With several films having already received international recognition, and a Panamanian Premiere this year’s festival is sure to be a success.

The fifth edition of IFF will take place April 7 - 13.  Here is the list of powerful documentaries that will show:

He Named Me Malala, directed by Davis Guggenheim.
Malala Yousafzai is the youngest person ever to receive the Nobel Peace Prize. She received the prize for her fight for the right of all children to education. Yousafzai, who miraculously survived an assassination attempt by the Taliban, radiates confidence and wisdom far beyond her years – 18 years old. He Named Me Malala gives us a guided tour of Yousafzai’s life, from the Swat Valley home she and her family were forced to leave behind to the UK house they now inhabit. We also track her meetings with Queen Elizabeth, President Obama and talk show host John Stewart, among other adventures. Oscar-winning filmmaker Davis Guggenheim’s intimate and engrossing new documentary brings us closer to both the courageous, inspirational figure and the bright, curious teenage girl. A Central American premiere.

The Daughter of the Lake, by Ernesto Cabellos Damián.
At the height of the Peruvian gold rush, Nelida, an Andean woman able to communicate with water spirits, decides to study law in an attempt to prevent a mining corporation from destroying the body of water she considers her mother. A gold deposit valued at billions of dollars lies just beneath Nelida’s lakes and leads farmers and Latin America’s biggest gold producer into conflict. Award-winning documentarist Ernesto Cabellos Damián’s The Daughter of the Lake will be a Central American Premiere at this year’s edition of IFF Panama.

The Pearl Button won the Silver Bear Award for Best Screenplay at the 2015 Berlin Film Festival.
Reflecting upon the history and the secrets that lie beneath the ocean, we present The Pearl Button, Berlinale 2015’s Silver Bear winner for best screenplay. It all started when a button was found at the bottom of the ocean, attached to an old set of rails. That button belonged to someone who was tossed into the sea. Does the water have a voice capable of revealing this secret?
At once poetic and polemical, The Pearl Button -- Patricio Guzmán’s companion piece to Nostalgia for the Light -- contemplates the fraught story of the nomadic Kaweskar, who once paddled the length of Chile’s immense Pacific coast. Through interviews with some of the last remaining Kaweskar, Guzmán chronicles the terrible devastation wrought by colonialism.
Patricio Guzmán will be conducting a multi-day documentary workshop.

My Father’s Land, co-directed by Miquel Galofré and K. Tyler Johnston.
Papa Jah moved to the Bahamas from Haiti in 1974, when he was just 19. He has never returned to Haiti, but after learning that his father, now either 103 or 105-years-old -- depending who you ask -- may be in ill health, he decides the time has come to make that long-belated journey home. Co-directed by Miquel Galofré and K. Tyler Johnston, My Father’s Land tells the story of Papa Jah’s odyssey. Along the way it explores the harsh realities of life for undocumented Haitians living in the Bahamas, with its increasingly xenophobic immigration policies. It is an immensely moving story of migration and family ties that even four decades of separation cannot break. My Father’s Land screening at IFF Panama will be the film’s Panamanian premiere.

Tea Time, directed by Maite Alberdi.
A lot of years have passed, but our sassy protagonists remain as close as ever. Filmed over five years, Maite Alberdi’s absorbing documentary, which will be a Panamanian Premiere, grants us a seat at the table with five Chilean women who have been meeting for tea and talk every month for the last six decades. It is a ritual that has been sustained over several sweeping historical changes. The world can turn upside-down, but these five immaculately groomed women, all of them graduates of the same Catholic high school, never miss that monthly five-o’clock call for libations and conversation, which ranges in topic from culture to gossip, marriage to mortality. At once intimate and epic, Tea Time is a testament to the value of examined lives and enduring friendships.