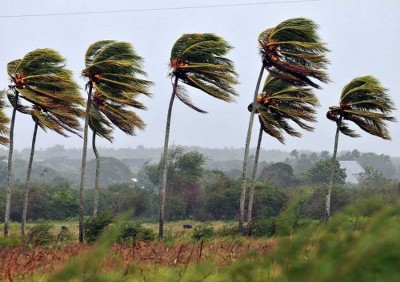 There is a high wind, rain and wave warning for Thursday & Friday Feb 11 - 12 in Bocas del Toro, Chiriqui,Veraguas, along with the Gnäbe Bugle and Guna Yala region. Sinaproc Director José Donderis said the country could expect 50 km/h  winds over  the Caribbean gusting to 70 km/8 and Pacific winds of  37 km / gusting to 80 km / h.

These winds could generate waves of 2 to 3 feet in the next 48 hours. With that being said, Donderis warned swimmers to take all safety measures.

Strong winds are not just dangerous for those enjoying the beach. Forceful winds can distroy roofs, down power lines, trees or other objects.

Strong winds have destroyed the roofs of two residences in the districts of Capira and La Chorrera, as confirmed by officials of the Ministry of Housing and Land Management (Miviot).  More than 10 greenhouses in the district of Boquete, Chiriquí, have been affected by the winds,  with falling trees also becoming an issue.
The most affected areas are Alto Lino, Jaramillo, Palmira, Alto Quiel.

Luis Cubilla, an 89 year old farmer in San Pablo Nuevo Chirigagua, lost his life when sudden strong winds brought down a mango tree in his backyard. Neighbors described the winds as unusual in the area.
According to reports there have been strong winds in the area since early Wednesday.