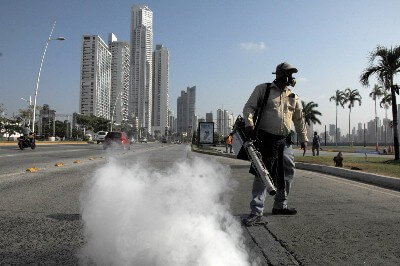 On Feb 1 the World Health Organization decided to issue a Global Emergency in an effort to stop Zika, a mosquito-borne virus, from spreading.

The same day, Panama’s Minister of Health, Francisco Javier Terrientes, announced “the Zika outbreak has been controlled in Panama,” with 50 laboratory-diagnosed cases of Zika, all in the Guna Yala region of Panama, 38 cases occurring in 2015 and 12 this year.

Despite the decreasing and comparatively low number of confirmed cases in Panama, the Varela government has issued the Joint Task Force (FTC) to work along side the Health Ministry (Minsa) to “strengthen actions against the Zika Virus”.

Health officials have made possible links between the Zika virus and a brain defect in infants along with a rare neurological syndrome that could cause paralysis in adults. With the ability to spread quickly, and no vaccine or treatment to combat the infection, Panama is deliberating a plan.

yesterday, “a prominent health official told AFP” that Panama may follow Brazil’s lead to fight the spread of the Zika virus by introducing genetically modified mosquitoes.

In regards to releasing the GM mosquitoes, Israel Cedeno head of the ministry's epidemiological unit, cautioned that the cost of would be high. The main question raised was if the money would be better spent on public information campaigns aimed at eradicating breeding spots for the insects.

The most realistic and tested GM mosquito, re-engineered to diminish populations of Aedes aegypti, was developed a British bio-tech company called Oxitec. By inserting a “self-destruct gene” into male mosquitoes and releasing them into the wild the gene can be passed on to offspring and cause them to die immediately after birth. This creates a population crash in A. aegypti. The hope is it will also diminish viruses like dengue, yellow fever, chikungunya, and Zika, which this resilient mosquito carries.

Oxitec has tested the technology with trials in the Cayman Islands, Brazil and Panama. “In 2014 trials were carried out in Panama West, resulting in a 93 percent decline in the mosquito population in the area.” (dailymail.uk) The trials were conducted with the support Panama’s National Biosafety Committee and  research centers, the Gorgas Institute.

While some say that Oxitec has rushed into the field, testing without sufficient review, others see it as a proven method of suppressing mosquito populations, and therefore of mosquito-borne disease.

While the Health Ministry of Panama, a tropical disease research lab, and the Gorgas Institute continue evaluating "the viability and feasibility” of releasing GM-ed mosquitoes, one question being raised is if it is sustainable.

Thomas Scott, a professor of entomology at the University of California Davis who has collaborated with Oxitec, explains:

“We still don't know if Oxitec's mosquito rampage will actually lead to a reduction in diseases like dengue or Zika — which is, after all, our ultimate goal here. It's entirely possible that Oxitec could kill 80 percent of A. aegypti mosquitoes but the remaining 20 percent would are still enough to sustain an outbreak.”

"If you had an 80 percent reduction in mosquitoes, you'd expect to see some effect on transmission, but you have to demonstrate that."

Since the modified males die without antibiotics, countries will likely need to release thousands and thousands of modified mosquitoes again and again to suppress populations. Scott notes, that if the method is stopped, A. aegypti could just come back.

This concern is also expressed in an article published by PLOS on the Geographic Expansion of the Invasive Mosquito Aedes albopictus across Panama. The article speaks to “a cautionary tale in the face of proposals to release genetically modified Ae. aegypti” which began in Panama in May 2014.

Based on what is know about the mosquito species Aedes albopictus, it is suspected that, with similar demographic and dispersal, Ae. aegypti populations could in fact rebound by recolonizing once GM programs stop.

“GM strategies might have only short-term effects on vector population size and may commit Panama to a repeated and costly program for long-term arbovirus control.”

While the technology Oxitec has developed may aid in the fight against mosquito-borne disease, it is still unclear if it is Panama’s answer to Zika.