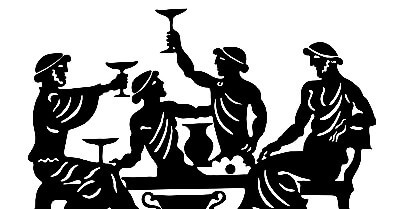 M. Stefan: The Wine Guy - Wine has been an important part of Greek culture for over 4000 years as the numerous archeological discoveries throughout Greece have revealed. The ancient Greeks knew well the nutritional value of wine as it became an inseparable part of their daily regimen.

For the ancient Greeks the culture of wine was embodied in the deity, Dionyssus. The son of Zeus and Semeli, Dionyssus was one of the most worshiped of the Greek Gods inspiring artists, philosophers and the lives of everyday people.

The Ancient Greeks loved to organize intellectual gatherings called "symposia" where they would eat and talk about predetermined philosophical subjects while drinking wine. While moderation was strictly adhered to, the Greeks would utilize the beneficial effects of wine to help achieve greater intellectual clarity and spiritual awareness.

In recent years, the Greek wine industry has undergone enormous improvement with serious investments in modern wine making technology. The new generation of native winemakers is being trained in the best wine schools around the world and their efforts are paying off as Greek wines continue to receive the highest awards in international competitions as well as the recognition they deserve throughout the world.

What makes Greek wine so unique are the more than 300 indigenous grape varieties grown there, some of which have been cultivated since ancient times. Many of the world’s best wine critics agree that the distinct flavors that come from these native grape varieties are a strong marketing advantage for the Greek wine industry. This extensive variety of grapes together with the moderate Greek climate, plentiful sunshine, low average rainfall and soils of moderate fertility combine to provide an excellent environment for the production of high quality wines.

Recently, I was able to taste 5 excellent quality and reasonably priced wines from the producer Gaia in Greece. If you’re ready to branch out and try something new, different and fun, consider these wines.

2014 Gaia Notios White $9.95 12% alc. Greece
A nice blend of Moschfilero and Roditis. Crisp, a bit tart with citrus and fruit on the nose. It gets richer as it warms. Complex flavors of apple and mango.

2012 Gaia Thalassitis $18.50 13% alc. Greece
From the island of Santorini. 100% barrel fermented Thalassitis. Another dry and crisp white with serious complexity. Because it has some bottle age, there is a bit of browning in the color but it only adds to the multiplicity of flavors. Citrus, slight oakiness with a minerality and earth backbone.

2015 Gaia Agiorgitiko 14-18h $10.25 12.5% alc. Greece
This dry rose’s name refers to the length of time the grape skins are in contact with the juice. Therefore, after 14 – 18 hours of skin contact, the wine takes on a lovely deep pink color. Well balanced, dry with lingering flavors of berries, currents and other fruits. This wine can stand up to full flavored foods such as Chinese or Thai.

2011 Gaia S $25.00 14% alc. Greece
Blend of Agiorgitko & Syrah. Very serious red! Deep berry, earth, plum, prune and other fruit flavors. Intense nose. Because this wine is unfiltered, it has the fullness and weight of a world class wine.

M. Stefan has over 30 years experience in the wine trade and has traveled extensively throughout the wine producing regions of the world.  His column is a regular feature of La Playa Community. He can be reached at markken53@gmail.com and appreciates your comments.