Mark your calendar, The 2019 Golden Frog Festival celebrations are just around the corner. Learn why EVACC is conserving Panama’s amphibian population, head to El Valle de Anton from August 10 - 17.

By 2009, with support from the zoological societies in the United States and other associated partners, this facility was a pioneer for Panama and the Central American/Caribbean region. EVACC’s objective of being constructed was to endure that endemic endangered species preservation be executed in the country of the amphibian, instead of being expatriated or exported to another country (typically United States Zoological Facilities).

Since 2017, El Valle Amphibian Conservation Center Foundation (EVACC Foundation) established to be a legally recognized Panamanian NGO, which receives funding from a variety of sources and has a broad range of partnerships in the government of Panama as well as international ones.

The EVACC Foundation is now in charge of managing the amphibian collection, which was at EVACC in a small zoo in El Valle de Anton but has moved to the grounds of the Hotel Campestre, also in El Valle de Anton. The Foundation has outfitted three shipping containers as amphibian pods or laboratories. To date personnel of the Foundation have not only successfully bred the Panamanian golden frog in Panama, but over 15 different genres of amphibians of over 40 amphibian species.   Their main objective is to preserve and protect nine of the most endangered amphibian species in Panama.

The goals of the Foundation are threefold; 1) to prevent extinction of native amphibians through breeding and managing them as assurance populations; 2) to develop strategies and trials to re-introduce these species back into the wild; 3) to educate and create awareness at the local and national level, building local capacity and professional development.

The EVACC Foundation together with a diverse community team created the annual Festival, which culminates the days before and after August 14, National Golden Frog Day.  The national law 37 (3 August 2010) and declares that the golden frog is a cultural and ecological symbol of Panama. Each year the committee for the Golden Frog Festival organizes different events for the whole community to enjoy.  The committee includes government agencies such as Ministry of Education, Ministry of Environment, and Ministry of Agriculture, as well as community groups.

This year the Golden Frog Festival celebrations will be from 10-17 August in El Valle de Anton. Here are the events taking place this year: 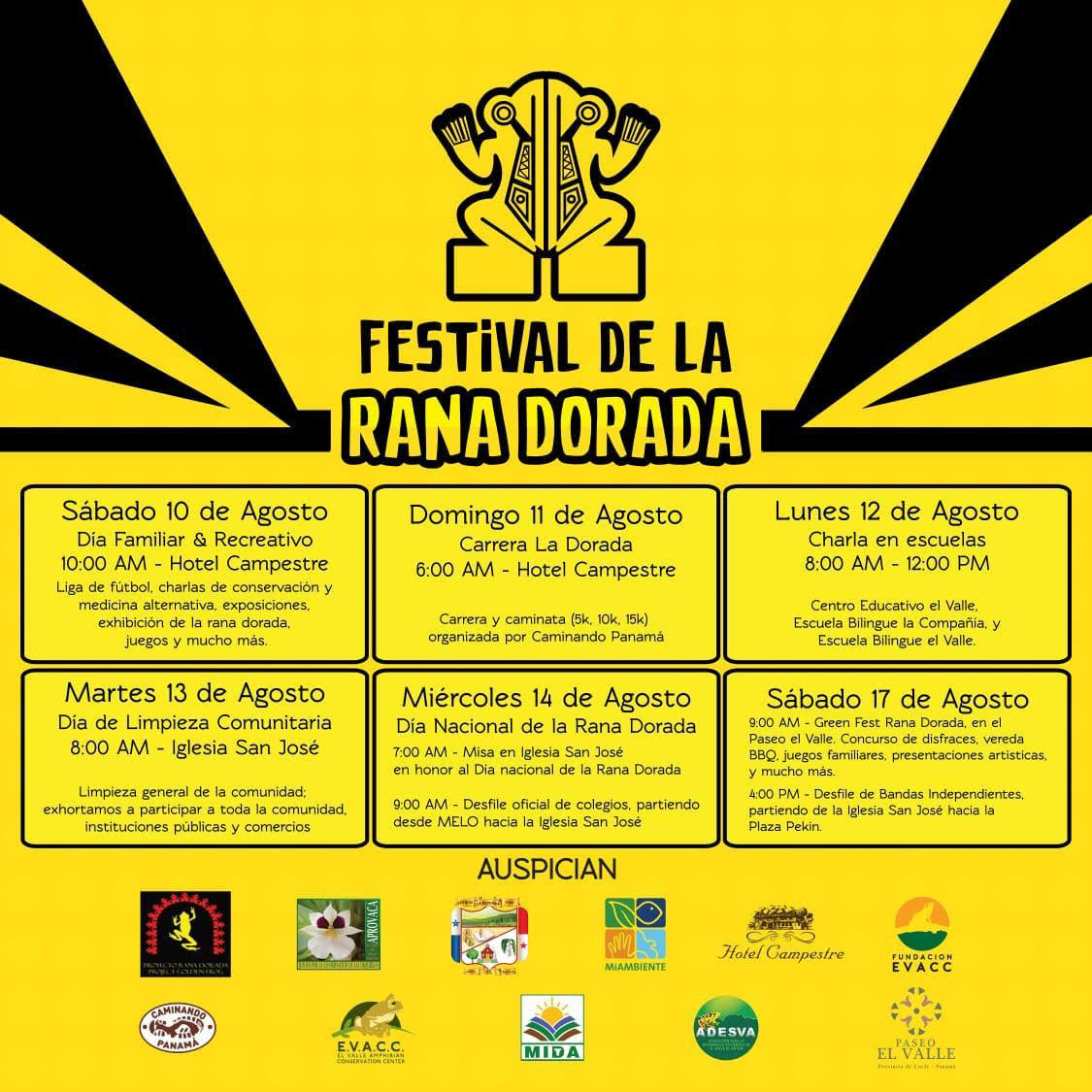