Over the past decade, Latin American women have served as presidents in Argentina, Brazil, Chile and Costa Rica. And In Panama, Isabel de Saint Malo serves as the vice-president and foreign minister and is the first women to hold both positions in Panamanian history.

Isabel de Saint Malo worked with the United Nations Development Program for Panama for 15 years and helps to implement the 17 Global Goals for Sustainable Development.

Isabel de Saint Malo has represented Panama on the world stage a number of times and has been key in building international dialogue throughout her career. She played a key part in conversations with Cuba and the United States that took place during the VII Summit of the Americas.

For her achievements she has received recognition from the Harry S. Truman Institute for the Promotion of Peace, becoming the first Latin American person to receive this award. She has also been awarded “Women of the Year” by The Panamanian Business Executives Association (APEDE) a recognition that came in 2012. 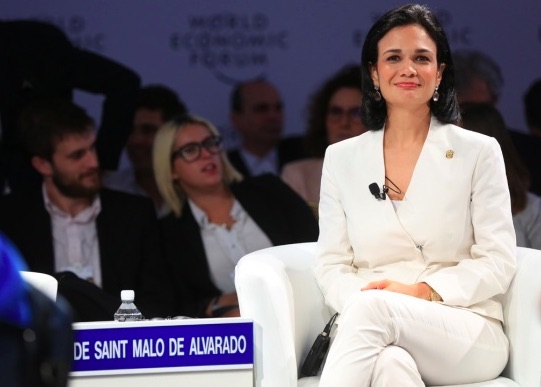 In her capacity as Vice-President, she also works closely with the Social Cabinet and National Council for Development, offering support and strategy, driven towards the adopting sustainable development goals, which include the eradication of poverty and social inequality.

De Saint Malo has been fundamental moving Panama forward in the area of  Human Rights, Publicly announcing her support of LBGT rights in March of last year. She also spoke to the opinions of the Inter-American Court of Human Rights on the recognition of gender identity and same-sex marriage as “binding” this year.

Get to know The First Lady of Panama, Lorena Castillo

Alongside De Saint Malo in the support of LGBT right is Panama’s First Lady, Lorena Castillo who been a spokesperson for the Zero Discrimination movement taking place in the country. Lorena Castillo is also the UNAIDS Special Ambassador for Latin America and will also be recognized this  Thursday March 8th in New York with the 2018 ”Leadership Award” granted to her by the Association of United Women for Peace. During her visit the First Lady will also meet with the Secretary-General of the UN, António Guterres, according to reports from the Panamanian government today.

Panama’s first lady will be a spokesperson at the sixty-second session of the Commission on the Status of Women, to be held within the framework of the commemoration of International Women’s Day 2018.

The series of meetings will work to discuss challenges and opportunities faced in the area of achieving gender equality and the empowerment of rural women and girls in Panama.

More Women Leaders in Latin America and the Caribbean

Also recognized for their achievements are Margarita Cedeño de Fernandez, Vice-President Cedeño  of the Dominican Republic and former First Lady of the Dominican Republic Maria ’Mayita’ Melendez: mayor of Ponce, Puerto Rico, Paula-Mae Weekes is a Trinidadian lawyer and judge of the Turks and Caicos Islands Court of Appeal and  president-elect of Trinidad and Tobago, due to take office on March 19. And finally, Patricia Espinosa Executive secretary of the United Nations Framework Convention on Climate Change (UNCCC).

International Women’s Day 2018 around the World

Today we celebrate the ambition of women in Latin American and their role in fostering international dialogue, and all women. 2018 has been a year of women calling for change. With #MeToo and Time’s Up, raising women’s voices around the world, International Women’s Day 2018 became a stage for these voices to again be heard, globally.  This time with an even greater sense of urgency that echoed from all corners of the world. The New York Times reports that protests took place in Italy, Spain, England, Rome, the Philippine capital of Manila, and New Delhi India. Women are rallying for gender equality and against sexual discrimination in Pakistan, Kenya and Shenyang China.

2018 International Women’s Day uses the hashtag #PressforProgress, a campaign asking people to keep using their voice. A tool which has shown it’s undeniable power this year.