Register for the 2017 Coronado Triathlon 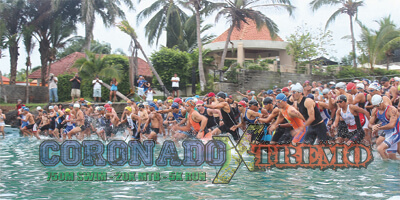 XTREMO Coronado is a popular sprint triathlon that takes place every year in Coronado Panama. This year the event will take place on September 24th, 2017, starting 7:00 a.m. at the Coronado Beach Club.

If you are participating, registration begins at 5:00 a.m. Register for the event here on the Union Triathlon Panama (UTP) website.

The XTREMO Sprint Triathlon has been taking place in Coronado Panama for the past 17 years! The event, popular among locals and expats is organized by a group called Union de Triathlon de Panama. The Coronado XTREMO Triathlon is among the oldest triathlons in Panama, the oldest taking place every year in Portobello.

The triathlon includes a 750 m swim, a 22km bike and a 5 km run. The name XTREMO is given to the race as it takes place on the rugged roads and sandy beaches of Coronado Panama. The first three places in each age group and category.

The categories are Male, Female and Mixed. (Three or two Athletes per team, minimum age 18 years.) The age of competition is the one fulfilled as of December 31, 2017.